The court of appeal has dismissed a move by Blackbushe Airport Ltd (BAL) to remove the airfield from the register of common land.[1]  The court refused to overturn the decision of the High Court that the land must remain registered as part of Yateley Common.  That decision was defended by Hampshire County Council and the society, Britain’s leading pressure-group for common land. 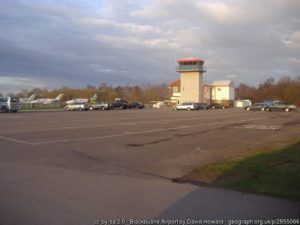 Blackbushe airfield, Hants. This is part of the hardstanding on Yateley Common which was alleged to be the curtilage of the control tower. © David Howard, Creative Commons Licence

BAL applied to the council to deregister in 2016, on the grounds that the entire airfield—occupying 46 hectares—was curtilage of the terminal building.  The court of appeal has confirmed that the application must fail.

Speaking today, the society’s case officer, Hugh Craddock, said: ‘We are delighted that the court of appeal has decided that Blackbushe airfield[2]
should remain registered common land.  BAL’s application for deregistration was a cynical attempt to adapt a provision intended to address mistaken registration of small areas of land, to enable the deregistration of an entire airfield.  Yet as long ago as 1976, the High Court decided that the airfield rightly was part of Yateley common, and should be registered as such.

‘We told the court that, if this application succeeded, it would put at risk countless commons which are occupied by golf courses—where it would be claimed that the course were curtilage of the club house—or town or village greens—where the green were said to be curtilage of the cricket pavilion.  The court agreed: Lady Justice Andrews said that: “it plainly was not Parliament’s intention to enable owners of large tracts of common land used for recreational purposes to deregister that land” on the basis that it was curtilage.’

Hugh continued: ‘The outcome of BAL’s application turned on the meaning of “curtilage”.  This judgment brings some clarity to that meaning, after a string of puzzling decisions in the higher courts over many years.  This will assist us in defending other areas of commons and greens where landowners seek to take advantage of an over-generous interpretation.

‘We hope that this decision brings to an end litigation intended to deny the status of the airfield as common land, involving two public inquiries and three cases in the higher courts.’

Hugh added: ‘We are very grateful to Hampshire County Council and its legal team for taking the lead in defending the status of Yateley Common, to Peter Tipton and his legal team for defending his and other commoners’ rights, and to our own legal team for their thorough research of the history of the presence of the airfield on the common and the varying judicial interpretation of curtilage over more than two centuries. Their work enabled today’s judgment.’[3]

[1]The application was made under paragraph 6 of Schedule 2 to the Commons Act 2006, which enables an application to deregister common land where, among other requirements, ‘since the date of the provisional registration [16 May 1967] the land has at all times been, and still is, covered by a building or within the curtilage of a building.’

[2] The airfield is part of Yateley Common and was requisitioned as an RAF base during the Second World War. Although it was de-requisitioned in 1960, and the terminal building was sold off for demolition (the contractual obligation to demolish being flouted), the common continued in use as a private airfield — despite being correctly registered as common land under the Commons Registration Act 1965 following a decision of the High Court in 1976 (Re Yateley Common, Hampshire, [1977] 1 All ER 505).