The meaning of ‘curtilage’5 min read

On 12 June this year, inspector Alan Beckett granted an application to deregister around 46 hectares of Blackbushe aerodrome at Yateley Common.  The application, made by Blackbushe Airport Ltd (BAL), was made under paragraph 6 of schedule 2 to the Commons Act 2006, on the basis that the land was ‘covered by a building or within the curtilage of a building’.

The aerodrome dates back to the Second World War, when much of the common was requisitioned in 1941.  A terminal building and three runways were laid out—one crossing the A30 (on which traffic had to be stopped for flights)—and occupying most of the west end of the common.  Derequisitioning lapsed in 1960 and the aerodrome was acquired and reopened in 1962 as a private aerodrome.  The terminal building, dating from the War, remained lawful, but other buildings and structures erected subsequently were not.  Proceedings in 1964 under section 194 of the Law of Property Act 1925 were unsuccessful, but not appealed.  Subsequent licensing by the Civil Aviation Authority purported to exclude both the public and the exercise of rights of common.  A public bridleway across the airfield remains obstructed.

In November 2016, BAL applied to deregister the totality of the present extent of the aerodrome (much reduced in size from the original military airfield, and with only one operational runway).  The application, to Hampshire County Council, was referred to the Planning Inspectorate for determination, because an objection was made by a commoner (and member of the society), Peter Tipton.

In April this year, the inspector convened a four-day inquiry at the Elvetham hotel near Hartley Wintney.  BAL, the society and Hampshire County Council were represented by counsel—in our case, Philip Petchey, instructed by our case officer, Hugh Craddock. 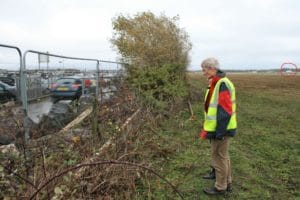 Philip Petchey inspects the Blackbushe aerodrome boundary. This is alleged to be curtilage of the terminal building (in circle), 1,050 metres away.

In response, the society traced the confusing history of the use of the term ‘curtilage’ in legislation, and the uncertain and sometimes contradictory interpretation of its meaning by the courts.  We said that the courts had traced a ‘conveyancing’ meaning—referring to the dictionary definition of ‘A small court, yard, or piece of ground attached to a dwelling house and forming one enclosure with it.’  In Methuen-Campbell v Walters, the court had decided that curtilage must be ‘so intimately associated with [a building] as to lead to the conclusion that the former in truth forms part and parcel of the latter’.

We said that the courts had also identified a planning and listed building meaning, in which curtilage had been given a wide purpose to ensure the preservation of listed buildings, where statutory protection was afforded to ‘any object or structure … forming part of the land and comprised within the curtilage of a building’.  That meaning was unclear: the courts had both declined to find that a lecturer’s home in extensive grounds was curtilage of a country house, but that a stable block was curtilage of a hotel some 200 yards away.  The society said that parliament had intended curtilage in the 2006 act to have the more conservative conveyancing meaning: a small piece of land, part and parcel with the building and ancillary to it—but that in any case, a 46-hectare airfield could not, on any definition, form the curtilage of a terminal building.  We pointed out that if Brighton and Hove airport were curtilage of the listed terminal building, no significant changes could be made to the entire airfield without listed building consent.

In his decision, the inspector relied heavily on a recent case in the high court, Challenge Fencing v Secretary of State for Housing, Communities and Local Government, in which Lieven J had attempted to summarise the factors relevant to determining curtilage.  The inspector rejected the society’s submissions as to there being a ‘conveyancing’ meaning and a ‘listed building’ meaning of the term curtilage, which he said ‘are not correct.  Given the extent to which this subject has occupied the mind of the courts it appears that there is no hard and fast definition of curtilage, nor that its definition falls neatly into “conveyancing” and “non-conveyancing” cases.’  He found that the operational area of the airport was part and parcel with the terminal building, and formed its curtilage.  Oddly, the inspector found ‘that whilst there may be an ancillary relationship of the building to the land, there is also an ancillary relationship of the land to the building.’  The inspector did not even address the submissions made by Mr Tipton that deregistration would deprive him of use of his rights of common in breach of the protection for property rights enshrined in the Human Rights Act 1998.  Accordingly, the application was granted.

The society is deeply disappointed in the inspector’s decision.  It beggars belief that a 46-hectare airfield can be curtilage of a terminal building, any more than a railway station might be curtilage of the signal box.  However, the meaning of curtilage has vexed the courts on many occasions, and has yet to acquire a settled meaning.  A challenge would very likely take the society to the court of appeal, and perhaps to the supreme court, and involve the interpretation of a term which has much wider use and importance in the planning field.  Moreover, Hampshire County Council has filed its own application for leave to seek judicial review, which the society will follow closely.  We wish the council well.