We have written to the Welsh Government’s Minister for Environment, Energy and Rural Affairs, Lesley Griffiths MS, asking her to introduce a fee for applicants who want to swap areas of common land.  The process is ruled by section 16 of the Commons Act 2006. 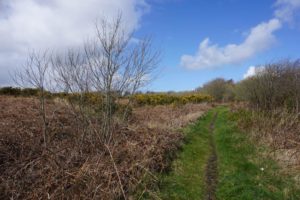 Clyne Common showing to the left of the track the land which it was proposed to swap. © Copyright Bill Boaden and licensed for reuse under this Creative Commons Licence

We point out that section 16 requires that, in all but the smallest cases, alternative land must be given in substitution, and that such applications invariably are made to pursue private interests in the development of land.  Applications are made to the Planning Inspectorate (Wales), which carries out an investigation on behalf of the Welsh Ministers.  Since private interests are set to benefit from the exchange, the society believes that they should be required to pay a fee to cover the administrative costs to the Planning Inspectorate of processing an application.

We refer to a recent application by the Duke of Beaufort’s Somerset Trust to deregister part of Clyne Common near Swansea, to facilitate housing development.  There was no consultation, although the Welsh Government recommends consultation.  Following strong opposition and criticism of the application it was withdrawn, only to be resubmitted a few months later with minor alterations.  After further objection, this second application too was withdrawn.  Because the trust did not have to pay a fee, it could waste the time of objectors and the Planning Inspectorate in testing the opposition, at a cost to the public purse.

Says Kate Ashbrook, our general secretary: ‘We see no reason why the Planning Inspectorate should expend scarce resources on repeated but unproductive applications, or why objectors should spend their time and effort on identifying flaws in an application which has not been refined through pre-application consultation.  We therefore have invited the minister to instruct officials to develop proposals for introducing a fee based on the average cost of processing an application.

‘For the record, since 2007 in England applicants are charged £4,900 to cover the average administrative costs to the Planning Inspectorate of processing an application.  We hope Wales will soon do the same.’