As Britain’s leading pressure-group for common land [1], we are angry that the Duke of Beaufort’s Somerset Trust, the owner of part of Clyne Common, south-west of Swansea, has reapplied for a land swap, having withdrawn a similar controversial application in April.

The trustees of the Somerset Trust have applied to the Welsh environment minister, via the Planning Inspectorate, to deregister 2.6 hectares on the eastern side of the common in order to build affordable housing there, and to replace this with 3.4 hectares of farm land, two kilometres away on the western border of the common, at Ryeground Farm. 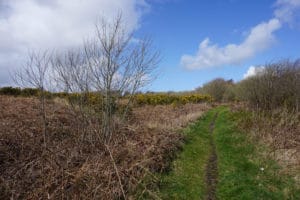 The housing is proposed by Edenstone Homes in partnership with coastal housing, but planning permission has not yet been obtained.  Because the development would be on common land, the applicants were required to obtain ministerial consent to deregister the common, and in doing so to provide suitable exchange land.

In its objections the society argued that Clyne Common is one of the classical Swansea urban commons which are a historical feature of the city and county.  The built-up area of Sunnybank and adjoining estates, where it was proposed to deregister the land, abut directly onto the common.

The applications sought to deregister a substantial chunk of Clyne Common for development, and replace it with cheap, low quality farm land on the other side of the common, two kilometres distant.  This is far from where those in Sunnybank and neighbouring communities, who enjoy this part of the common, live, and indeed at least 500 metres distant from where anyone at all lives.

Moreover, the character of the replacement land would discourage access, and its rectangular protrusion west from the common would in any case render access largely superfluous, because it does not lead anywhere or connect with any highway.

Says Hugh Craddock, one of the society’s case officers: ‘Having wasted everyone’s time with an entirely unsatisfactory application which was withdrawn, the applicants have come back with essentially the same elements which inspired opposition the first time round.

As we said before, Swansea needs more affordable housing, but it is wrong to build it on the very sites which make Swansea special.  This is a cynical attempt by the landowner to turn a profit from its ownership of Clyne common.  We trust that Welsh ministers will reject the proposal.’

[1]Common land is land subject to rights of common, to graze animals or collect wood for instance, or waste land of the manor not subject to rights.  The public has the right to walk on all commons, and to ride on many.  Commons are protected in that works on common land require the consent of the environment minister, via the Planning Inspectorate.