Much ado about nothing4 min read

Our Coventry local correspondent John Hall, with assistance from one of our case officers, Hugh Craddock, exposes the sloppy approach to rights-of-way matters by the National Transport Casework Team (NTCT), and persuades it to put things right.

In March, the NTCT proposed to make two orders under section 247 of the Town and Country Planning Act 1990, to stop up highways at Southam and Wedon Closes in Coventry to enable development to take place. In both cases the highway to be stopped up included a short spur from the end of road leading to rectangular areas of land behind houses.

Our local correspondent John Hall did his usual research, checking the legislation, planning application, definitive map and statement, and the council’s online planning map. He also made a site visit and took photographs. 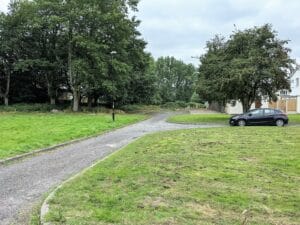 The non-highway land (where the car is parked). Photo: Brian Keates

Garages
It transpired that although the two spurs were highway, they led to land which had contained garages servicing houses in the named streets. Only the garage bases and the areas for driving to them via the spurs, remained. Crucially, they were not listed as highway on the planning map, and interrogation of the map showed ‘no information available’ for these areas.

John responded to NTCT, saying that, while he had no problem with the spurs, in both cases he objected because the rectangular areas were not highway. How, John asked, could the secretary of state stop up a highway that wasn’t a highway?

NTCT replied with its stock response, that the objection was invalid. It asserted that the secretary of state can stop up any area which may have acquired highway rights through use by the public. John stood his ground, pointing out that the council as planning and highway authority did not own the land and had no knowledge of it being highway land, and that the only usage had been by the owners of the garages who lived in adjacent houses. NTCT still said the objection was invalid. At this point John sought assistance from Hugh Craddock, one of our case officers.

Inappropriate
Hugh and John argued that the use of section 247 to stop up non-existent highways was inappropriate and should not be used on a purely precautionary basis. Research showed that some garages had been sold by people who had bought their council houses. Another ground for objection was that the order could not be used against private easements. Moreover, due to the operation of section 66 of the Natural Environment and Rural Communities Act 2006, no public right of way is created for mechanically-propelled vehicles (MPV) after 2 May 2006. Thus, in this case any public right of way for MPVs must have been created before 2006.

But, so far as we know, there has not been even the slightest allegation of highway rights over the garage blocks or forecourts. They are included in the order out of an abundance of caution. The society believed that they could be deleted from the order without any impact on the outcome. In order for land to be subject to the order it must be ‘highway’ and there is no evidence that it is anything of the sort.

No grounds
John also informed NTCT (not for the first time: see ‘No convenience for Knowle Green’) that in the society’s view, section 247 imposes no grounds for making an objection. Therefore, even if an objection might be considered irrelevant or frivolous (and it was submitted that this was neither) it is still a valid objection.

John had meetings with the developer’s agent and agreed that if the order were remade with the offending areas removed, he would not object. NTCT eventually did this and John withdrew the objection, allowing work to commence on the site.

John subsequently found that Citizen Housing (the social-housing contractor) has a new, large-scale housing project whereby it will demolish old garages and replace them with kit-built, prefabricated, starter homes throughout the West Midlands, this area being the first building site. John believes that NTCT was testing this sloppy approach on this case, hoping to create a precedent for the hundreds of small developments still to come. We hope that, thanks to John’s vigilance, NTCT will act properly in future.