Local authorities in south London, keen on exploiting their commons and open spaces, are facing stiff opposition from local campaigners, writes our local correspondent for Lambeth and Wandsworth, Jeremy Clyne.

Clapham Common has become a battleground because of Lambeth Council’s misuse of a large area, known as the ‘events site’. This is closed to the public for weeks to accommodate large-scale events which cause serious damage to the ground.

Earlier this year the site was fenced off again for seven months to allow a £200,000 ‘once in a generation’ restoration. Within weeks of reopening, the ground suffered significant damage from a major music festival, undoing the restoration works. 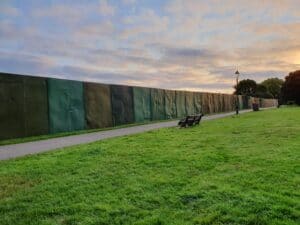 Public enjoyment ruined: the 3-4 metre-high steel enclosure, more than one-kilometre in circumference, on Clapham Common during the music festival

Accepted
The council finally accepted that, by the Greater London Parks and Open Spaces Order 1967, it must obtain the environment secretary’s permission for the event’s structures and enclosures on common land. It applied but the application has yet to be determined. Meanwhile, it went ahead with the event, arguing that retrospective permission would suffice.

We fear that if such retrospective permission is granted it will serve as a precedent for future misuse of this and other metropolitan commons.

On behalf of the society, I have supported and advised our members, the Friends of Clapham Common and the Clapham Society, which are pressing for a public hearing and hoping to crowdfund £20,000 to pay for representation by a specialist planning lawyer.

Football pitches
Meanwhile, in neighbouring Wandsworth, the council aims to grant a 25-year-lease of part of Tooting Bec Common to a private developer who would build four enclosed and floodlit football pitches and charge for their use.

Objectors are angry at this abuse of the common and the enclosure of land valued for informal activities. The huge number of objections to the planning application were ignored by the council, effectively judge and jury in its own development, were it not for the requirement for consent under the 1967 order. The opposition to the application for works on the common has caused the planning inspectorate to call a public hearing.

Wandsworth Council has also been caught out trying to expand, stealthily and massively, the events site on Tooting Bec Common. I spotted that crucial plans were missing from a licensing application to hold major events on the common.

The plans were revealed, and showed a whole new area of the common described as the ‘designated events site’. In response to my Freedom of Information request the council admitted that the enlarged area was not, and had never been, part of the events site. The licensing application has been dropped.