Our member John Emery has died aged 90. He has left us a generous gift of £10,000. His nephew, Lewis Turner, writes of his life.

John, the youngest of three children, was born and grew up in the village of Garn-yr-erw near the industrial town of Blaenavon in Torfaen. The rugged mountains surrounding his home must surely have fostered his love of the outdoors and his appreciation of beautiful landscapes, and these stayed with him throughout his life. 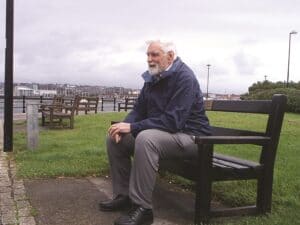 After leaving school he was apprenticed to a carpenter and joiner with the local co-operative society where, among other things, he learned to make coffins. Then he was called for National Service and enlisted in the RAF where he trained as a wireless mechanic although it wasn’t a trade he enjoyed.

After his period of compulsory service, he returned briefly to civilian life but found it unsatisfying and so re-enlisted. This time his carpentry skills were put to good use as he retrained as a boatwright and joined the Marine Craft Unit maintaining high-speed rescue launches. While based at RAF St Athan near Cardiff he became a member of the bases’s mountain rescue team and spent many weekends training in the Brecon Beacons as well as further afield. More UK and oversees postings followed which took him far and wide. He spent some of this time ar RAF Mount Batten in Plymouth, and it was in Plymouth that John decided to settle when he retired.

There he involved himself in local affairs including work for the preservation of endangered historical buildings. He scrutinised local planning applications, and proposals to alter or extinguish rights of way. In fact, he got involved in anything that might be detrimental to the area that had become his home. He was writing to challenge authority and could be relied upon to hold the decision-makers to account.

On one occasion this extended to taking Plymouth City Council to the magistrate’s court to compel it to recognise and protect the correct route of a right of way. John, having as usual done his research thoroughly, presented a strong case and was successful, despite being pitted against a well-resourced opponent which had employed the service of a barrister.

As his health declined, he was less able to venture far from home but continued to contribute where he could and for many years wrote the ‘Community news’ page for the parish magazine. John remained a life-long bachelor having decided that marriage and children were not for him. However, he was a wonderful uncle and great-uncle, and a true friend to those fortunate enough to have known him. We need more like John.

Adds our general secretary, Kate Ashbrook: ‘John was a member for many years and I remember him in particular for his feisty campaign against a path closeure through Ridgeway School at Plympton St Mary. He lost in the end but only after a long battle. He was incorrigible, and we miss him’.