Residents of Hanwell in Ealing, west London, have returned part of their park to public access. Our member Steven Toft tells the story.

A fence was erected around a piece of the Brent River Park by the Hobbayne Trust (OS summer 2020 page 9) which claimed to own the land. The fence was partly removed by frustrated walkers. The job was finished in March 2021 by the Canal and River Trust (CRT) when residents reported that the fence encroached on the Grand Union Canal towpath land. 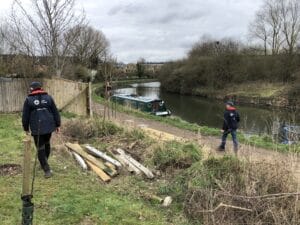 The fence being removed. Photo used with permission of CRT.

The Hobbayne Trust argued that the fenced-off land should have been part of the area it bought from British Waterways (BW) in 2014 and that an error by BW had put the boundary in the wrong place. But residents discovered that the officer who registered the land for BW had signed a statutory declaration that he had thoroughly searched the company’s records before registering that land.
The Hobbayne Trust’s claim to be in a legal process with the CRT to acquire the enclosed land was contradicted when the CRT confirmed that it had no interest in the land and no intention of registering it.

This land is designated as public open space. It was transferred to Ealing Council’s stewardship as part of a section 106 planning agreement. This information, and the fact that the council has been looking after the land for nearly 20 years, led residents to believe that Ealing Council has ample grounds to register it. The council said in December 2019 that it would do so, but this never happened.

Encouraging
Residents hope that under its new leader Peter Mason, Ealing Council will be more active in protecting public open space. Early signs are encouraging: the council has said again that it will register the land.

This would finally end the dispute. Residents want to see the land become part of the statutory local nature reserve being proposed by the Brent River and Canal Society for Warren Farm and its surrounding meadows.

Our member Steven Toft described the fight by Hanwell residents to wrest their open space from land-grabbers in an article we published in June 2020.