In April 2019, residents of Hanwell in Ealing, west London, were dismayed that part of their park had been fenced off. St Margaret’s open space sits by the Grand Union Canal and is part of Brent River Park. The neighbouring landowner, the Hobbayne Trust, finding that part of the park is unregistered land, appropriated it. 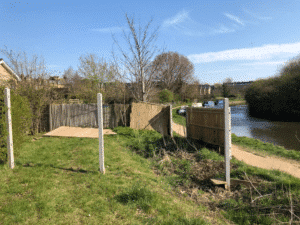 The fence after local people had broken through to the canal

In Ealing Council’s local plan, this land, along with the rest of the park, is designated as public open space and a grade 1 site of importance for nature conservation. It has been publicly accessible for more than 20 years and has been maintained by Ealing Council at public expense since the early 2000s.

In response to residents’ complaints, the Hobbayne Trust announced that the fenced-off land should have been part of the land it bought from British Waterways in 2014 and that an error by British Waterways had put the boundary in the wrong place.

But there is an Ordnance Survey map of 1960 which shows the boundary in exactly the same place as it was before the Hobbayne Trust moved its fence. That was two years before British Waterways was formed.

Local residents didn’t buy the trust’s explanation and nor did the Land Registry which rejected the trust’s claim of ownership on 1 August 2019. Meanwhile, fed up with waiting for the trust or Ealing Council to move the fence, some residents took the law into their own hands. Over the August bank holiday they broke it down.

Yet the Hobbayne Trust persisted, arguing that it was in ‘a legal process’ to acquire the land. and failing to mention that its application to claim ownership had been rejected by the Land Registry.

Eventually, in December 2019, Ealing Council told residents that it did not believe the Hobbayne Trust had any legal claim to the land. The council confirmed that it would apply to formalise its stewardship of the land by registering its ownership and would ask the Hobbayne Trust to move its fence. So far that hasn’t happened and the remains of the fence lie as a decaying eyesore, spoiling an otherwise beautiful, canalside walk.

The footpath to the canal has reappeared as people reassert their right of way over the land, and it currently forms a useful social-distancing refuge for people passing on walks along the towpath.