Our local correspondents are never ones to give up on a challenge!

Lucy Wilson, our volunteer for north Cornwall tells the story of how Poundstock footpath 7  came to be fully restored to public use. 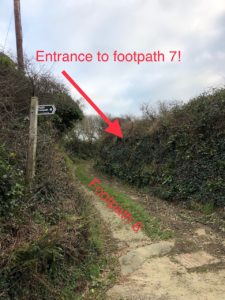 ‘This is one that Bob Fraser (of Cornwall Ramblers) passed on to me in 2018 after a local resident got in touch with him (Bob’s much further south in Cornwall so he asked if I’d look at it).  Bob had actually come across this path himself way back on 29th November 2012 and had made some notes; at that time his records showed it was blocked with dense blackthorn and several fences of barbed wire and was completely impassible; so we knew that this was a public footpath which had been blocked for 7-8 years at least.

In fact, going back in time on Google Earth to 2001 I couldn’t see a path through the blackthorn, or any entrance gap in the hedge so it may have been obstructed for a good many more years!  I picked this up with the reporting resident and the landowner and spent some time trying to encourage the landowner to undertake the work but without success.  Not much success followed with Cormac, the Cornwall County Council wholly-owned engineering and construction specialists either. They claimed that over 200 metres of heavy vegetation would require clearing and it wasn’t on their priority list.

So May last year I had to resort to serving notice on Cornwall Council. 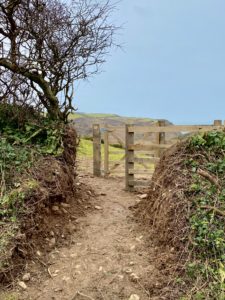 After the work to restore Poundstock footpath 7 to public use

Now Cormac have opened an entrance to the path through the hedge, two gates have been installed, and a wide open path carved through the blackthorn.  It’s a lovely off-road alternative to the steep winding coast road which gets busy with tourists, surfers and coastal adventure companies which zip back and forth to Millook.  It also connects to a network of other footpaths in the parish and completes a circular off-road walk. with beautiful views too. I’m so glad to see it open, but it’s such a pity that the tourists aren’t here to enjoy it again yet, hopefully the locals will instead!’

Thank you for all your hard work Lucy.

Find out more about our local correspondents.