The high court has quashed an order stopping up public access to highway land at Knowle Green in the borough of Solihull.  The order was made on our application.  The land comprises the public conveniences and surrounding land on a traffic island at the junction of Station Road and the High Street in Knowle. 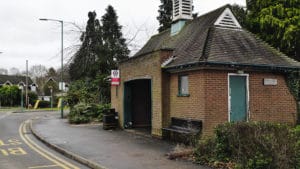 The order was made by the Secretary of State for Transport[1] following planning permission granted by Solihull Metropolitan Borough Council for change of use of the public conveniences and surrounding land to commercial use.[2]

The society’s local correspondent for Solihull, Richard Lloyd, objected to the order, because it would prevent access both to the existing public benches attached to the building—even though the planning permission envisaged their continuing use—and, unnecessarily, to surrounding land.  The National Transport Casework Team (NTCT), acting for the Secretary of State, initially refused even to consider the objection.  Then, when the objection was accepted, it failed to convene a local inquiry—as we contend the law requires—at which Richard could explain our concerns.[3]

Instead, the NTCT decided to make the order without amendment, and the society decided to challenge it.  To its credit, the NTCT accepted that its decision was unsound, and agreed that it should be quashed by the high court.  Ned Westaway of Francis Taylor Building advised the society, instructed by Matthew McFeeley of Richard Buxton, Solicitors.

Speaking about the court quashing the order, Richard said: ‘We are pleased the high court has acted to ensure better scrutiny of a proposal to remove public access from an area of Knowle Green.  The original plan was to find a new use for a disused toilet block, which also provides both sheltered and open-air seating for bus passengers.  A new shelter was to be provided further along the road, and the dilapidated building and grounds would be spruced up.

‘Unfortunately, it turned out to be impracticable for buses to stop near the new shelter, and buses would need to continue to stop outside the existing building.  Passengers would find it more difficult to see and flag down the buses, and those with reduced mobility would struggle to walk between the two points.  So it was agreed that the open-air benches would be retained in public use.’

Richard continued: ‘Despite that, a bureaucratic process rolled on which would have removed the right of the public to actually get access to the benches, and the Secretary of State failed to pay attention to our arguments.

‘With the order quashed, the society has succeeded in protecting, for the time being, public access to the small piece of land where passengers can sit near the bus stop.

‘Of course, the renovation of the run-down area and building is welcome, but there should be a re-think to improve the awkward arrangements proposed for the travelling public.’

[3]S.247(4) of the Town and Country Planning Act 1990 imposes no criteria for making an objection.  But, per s.247(5), where an objection is made, the Secretary of State must hold a local inquiry unless ‘satisfied that in the special circumstances of the case the holding of such an inquiry is unnecessary’.