‘Common land is frequently misunderstood.’  So declared our commons re-registration officer, Frances Kerner, who gave an illustrated online talk ‘What is Common Land?’ to the Hook Norton Local History Group in north Oxfordshire on 2 February. 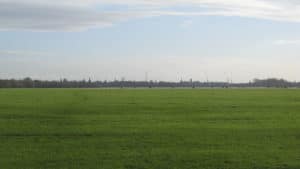 ‘The word “common” does not mean that the land is commonly owned.  Like all land in England and Wales it has an owner, but others have rights there too, to graze animals, collect wood and bracken or dig peat—and the public has the right to walk, and in many cases to ride on them,’ says Frances.

‘Commons are a special land type extending far back into our history.  Today only remnants of those commons survive but they are rich in archaeology, wildlife and natural beauty, and are important for public recreation.

‘In Oxfordshire there are 129 registered commons which include extensive areas such as Port Meadow in Oxford, and Russells Water Common in the Chilterns, and much smaller areas in many of the villages, including a half-hectare common in Hook Norton,’ Frances explains.

After defining common land, Frances traced how access to and use of the land have changed over time.  Originally, commons were crucial to people’s livelihood as a source of food, bedding, housing and heat.  But as attitudes and systems of agriculture changed, so too did common land.

The topics she covered included the extensive inclosures of the commons which led to their demise; the formation in 1865 of the Commons Preservation Society (which later became the Open Spaces Society); the society’s campaigns to protect and record common land, and the various Acts of Parliament which govern it.

Frances continues: ‘The Commons Registration Act 1965 provided for the registration of commons with the county councils, but the three-year period for registering them was far too short and many were either omitted or wrongly cancelled.  It has since become possible to register lost commons in some English counties, but sadly Oxfordshire was not included in the list.’

Frances concluded with a brief summary of her work in re-registering common land.

Comments Frances: ‘It is immensely rewarding to be able to raise people’s awareness not only of the history of common land but also of the variety and value of our commons. Every surviving area is unique and irreplaceable.  The Open Spaces Society champions them all.’

Find out more about commons here.