We help to save Surrey common from enclosure2 min read

The Secretary of State for Environment, Food and Rural Affairs has refused consent to the Hon Peter Herbert for fencing and a gate across part of Blackheath Common in Surrey.  Blackheath is four miles south-east of Guildford in the Surrey Hills Area of Outstanding Natural Beauty. 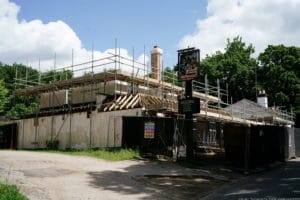 The Villagers, about two years ago, with the entrance to the car-park. Photo: Peter Trimming, Creative Commons Licence.

Peter Herbert, lord of the manor, wanted to erect the fence and control gate across the entrance to the car-park of the former pub, The Villagers, so as, he said, to restrict the parking there to local people.  He sought consent under section 38 of the Commons Act 2006.

We objected, arguing that the works were unnecessary and harmful, restricting public-access rights and being an unwelcome intrusion of fencing onto the historically unenclosed common.  We proposed instead demountable bollards which would exclude passage by vehicles while having a minimum impact on the landscape, and walkers and riders.

We pointed out that the car park is a part of the common and the heathland.  The common is managed by a scheme under the Commons Act 1899 which means that walkers and riders have rights over the whole area.  Furthermore, Wonersh bridleway 301 crosses the car-park, and it would be illegal to erect a barrier across it.

The planning inspector, Richard Perrins, rejected the application.  He noted that there were 28 objections and only three supporters.  He considered that the fencing and gate would look out of place and be an intrusion, harming the local landscape.  The cars which currently use the car-park would merely be displaced to another part of the common.  He was also concerned about the obstruction of the bridleway, and said that the works would ‘inevitably have an unacceptable or lasting impact on local and public access rights over the common’.

Says Hugh Craddock, one of our case officers: ‘This is a pleasing result.  The fence and gate would have been an unsightly encroachment on this unenclosed common in an area of high landscape value, and would have interfered with the recreational enjoyment of the area by walkers and riders.  We feared that the enclosure would pave the way to the land being incorporated in the private curtilage of the former public house’.