We have objected to the cavalier treatment of the North Downs Way National Trail in the ‘White Cliffs Inland Border Facility’ development north of Dover in Kent.  The society has supported the objection from the White Cliffs Group of the Ramblers. 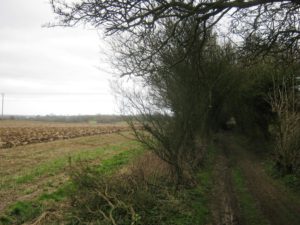 The Department for Transport wants to shove the ancient way onto a circuitous route around the development for a period of five years in order to create a lorry park for cross-channel freight.  The way currently follows a largely north-south route and is named on the Ordnance Survey map as Roman Road.

The society has deplored the lack of consideration which has been given to the existence of this route, and argues that the Department for Transport should have consulted user bodies specifically about this proposal instead of presenting a fait accompli.

The affected route is a popular byway of national and international importance.  Without prejudice to our objection to the development and its effect on the North Downs Way and the landscape, we have called for the following measures to be implemented.

1       The diverted route is kept open at all times during construction and is adequately surfaced to enable it to be used by walkers, cyclists, horse-riders and off-road motor vehicles.

2       Where it is on the line of the Guston-Dover road it must be constructed alongside, to ensure that recreational users do not have to share the route with vehicles.

3       The route must be safe for all users and of substantial width to ensure that it allows all users to pass each other and retain social distancing.

4       The route must be restored fully at the end of the five-year period and must be of better quality than now.

Says Kate Ashbrook, our general secretary: ‘We deplore the manner in which this whole exercise has been conducted.  We are presented with a fait accompli and no opportunity to influence the fate of the immensely popular North Downs Way.

‘The Department for Transport failed to consult about the plan, and then allowed only three weeks for comment via Survey Monkey (belatedly extended by one week).  It has made it clear that it is not consulting, merely seeking ‘feedback’—and work has already started on site before the closing date.  This is truly deplorable.  Now all we can do is try to secure a safe route for all users and full restoration in future.  We are grateful to the White Cliffs Rambles who are keeping a close watch on the site.’