In the Piddle Valley, north of Dorchester in Dorset, a 2.5-mile bridleway has been a historic link between the three villages of Piddletrenthide, White Lackington, and Piddlehinton. Today it is in a parlous state. The Piddle Path Action Team writes of its efforts to restore it.

The bridleway today is in places impassable for much of the year, due to flooding and deep mud which dries in rutted tracks after tractors have passed through. This forces users onto the busy, hazardous B3143 that runs parallel to the bridleway. 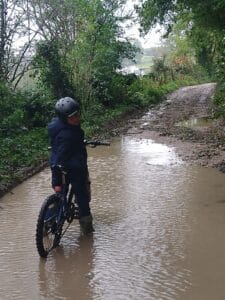 Our campaign group recently joined the society for advice on how to restore this lovely, but poorly-maintained, bridleway. Our aim is to work with Dorset Council, the highway authority, to make the bridleway passable all year round, thus providing a safe route to school, and to the local facilities, by foot, bicycle or horse.

The campaign has the support of the local first school, the Piddle Valley Parish Council, two churches, local businesses (including an equestrian one), and Dorset’s high sheriff. We have obtained good media coverage.
Our main challenges are that Dorset Council insisted that we need the permission from the landowners, and match funding. We believed that we could get funding due to the level of support. However, it has been difficult to identify the landowners (the council cannot tell us, and the Land Registry is incomplete); once we had done so we had to convince them. So far one has said yes, one has said no, and the other is not responding.

Maintenance
After speaking with the society, we learnt that Dorset Council was indeed responsible for maintenance on the bridleway. It took 11 months for us to get a meeting with the council, and we still have neither a spec nor costings, so we cannot start fund-raising. Since we mentioned that it is responsible for maintenance, the council has asked us to log the issues and distinguish maintenance issues from improvement ones.

The other challenge is local resistance. From surveys, discussions, and awareness events it is clear that we have the support of the vast majority of residents. However, there is a handful who are not in favour, and they are loud and influential. It has been difficult to have a dialogue with them and to bust the myths about the project: for example, some think we want to create a tarmac cycle-path, while others claim we want to convert the bridleway into a byway open to all traffic.
We should like to hear from any society members who have worked on a similar project or have advice for us.