They don’t make politicians like Chuter Ede (1882-1965) any more. He came from a nonconformist (Unitarian) background and began in active politics as a Liberal. He joined the Labour Party towards the end of WWI in his mid-thirties, having served as a provost-sergeant (ie a military policeman) in the Royal Engineers.

He was a schoolteacher who was unable through lack of funds to complete his Cambridge degree. His roots were in Surrey where he had a distinguished career in local government including (among much else) chairmanship of the county council of which he was a member for 33 years. Here too he entered parliament as MP for Mitcham twice—in 1923 and 1929-31—before finding a comfy billet in South Shields (1935-64) where the local Labour Party tolerated a largely absentee southerner as its member (unimaginable today). 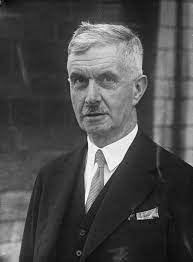 In 1940 Attlee recommended him to Churchill for the post of under-secretary of state at the Board (later ministry) of Education in the wartime coalition. There he and Rab Butler together produced the 1944 Education Act, a huge but timid reform. In 1945 he naturally expected to be given the education job in the new Labour government, but Attlee sent him to the Home Office where (though himself opposed to capital punishment) he had to decide whether convicted murderers, of whom there were 20 to 30 a year, should hang—and among those he consigned to the gallows was Timothy Evans, who was later shown to have been innocent.

As a Surrey man Ede had developed a deep love of the countryside and of walking in it (he never drove a car). He sought to defend green spaces and freedom to enjoy them. This was not the tradition of Winter Hill or of the mass trespass; there were no Benny Rothmans in Surrey. Ede won access or protection for countryside by opportunistic and incremental initiatives, eg at Epsom and Walton Downs, and at Box Hill.

Such gains were won with cross-party support in a Conservative county, and every acre was vital because Ede’s country lay on the southern edge of the great, expanding London conurbation. He had a major and continuing role in promoting the green belt which aimed to keep Surrey physically separate from Greater London and of course he had an eye for the needs of walkers such as himself and his wife. The stepping-stones across the Mole (see page 2) were typical.

In 1936 he questioned the minister of agriculture about the state of commons and manorial wastes subject to public rights, and the prospects for legislation on the subject. This brought him into contact with the society which had been and was seriously involved in securing protection for many commons and greens in Surrey.

He joined the society’s committee and later served as our president, and was on our committee while home secretary. (Can one imagine Mrs Priti Patel, who threatens to reduce citizens’ freedoms in the countryside, in a similar role?) In May 1965, shortly before his death, he appealed for the society in the ‘Week’s Good Cause’ slot on BBC radio.

This is a useful biography of a significant politician. There are a few errors, eg Lawrence Chubb was never chairman of the society. And, although Ede’s membership of and offices on various local authorities are faithfully recorded, the politics of those bodies and how a Labour member navigated them with success are left unexplained.

This is a year of 150th anniversaries, with the 1871 Hampstead Heath and Wandsworth Commons Acts, and a lesser-known but important event, when thousands of east Londoners gathered on Wanstead Flats, on Epping Forest’s southern boundary, on 8 July 1871. 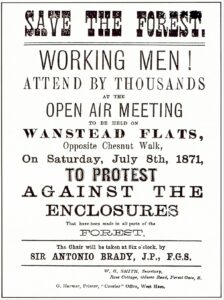 They were protesting against Lord Cowley’s enclosures on the flats—a mass meeting instigated by local middle-class gentlemen, including representatives of the newly-formed Commons Preservation Society (CPS), and involving many thousands of proletarian east Londoners. While the leaders became nervous of violent action, the mob laid waste to hundreds of yards of fencing. The police only managed one arrest. The press report that Prime Minister Gladstone with  members of his government inspected the broken fences a week later showed the efficacy of the demonstrators’ tactics.

This was a turning point in the campaign to save London’s commons and green spaces which were being swallowed up by development as new suburbs provided affordable housing. This lively book explains how popular protest saved Epping Forest, culminating in the Epping Forest Act 1878, and other London open spaces. Each chapter ends with a neat conclusion, summarising what has gone before. The role of the CPS is well described—but the battles were won by people power.

‘Down with the fences! Preserve your Footpaths’. So rang the clarion call to save Wandsworth Common, in south London, from destruction.

The dramatic story of the battle to preserve it is told in this impressive book, lovingly produced by the friends, to mark the 150th anniversary of the 1871 Wandsworth Common Act.

Robert Hunter, an early luminary of the Commons Preservation Society (now the OSS) and the country’s leading expert on the law of commons, was a local person. His role in getting the act passed receives due credit.

But history is only one small part of this lavishly-illustrated and wide-ranging 192- page overview, divided into sections titled ‘Nature’, ‘Buildings’, ‘Society’, ‘Culture’, and ‘Politics’, and split appropriately into 150 articles, quotations and anecdotes that can be dipped into at leisure. It features tales of the notable and unusual people who have lived there, its buildings and the changes which have taken place.