The Millennium Walk, a joint project of Maidenhead Civic Society and East Berks Ramblers, is a valuable trail as it links Hurley with Maidenhead Riverside, connecting with the Thames Path National Trail at both ends and opens up several pleasant circular walks. From Pinkneys Green it follows the Boundary Walk, a signed walk that follow the boundary stones that mark the 1934 boundary of Maidenhead. 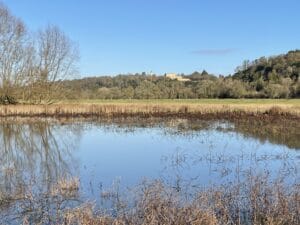 Battlemead Common with view of Cliveden which can be seen from the new path. Photo Maidenhead Civic Society

We are pleased that Cabinet of the Royal Borough of Windsor and Maidenhead Council has affirmed the decision of the Battlemead Common Steering Group that resolved to open a path across the East Field of the new public open space, between April and October each year. Battlemead Common is located to the north-east of Maidenhead town centre.

This direct path crosses a causeway and means that for six months of the year people do not have to divert away from the 1934 boundary to walk around the northern perimeter of the open space. During the months when it is open the path will also create a circular walk on the new open space.

Wildlife bodies were concerned that the route across the East Field would threaten nature, but the path is to be fenced, ensuring that any conflicts will be managed.

Says Kate Ashbrook, our general secretary: ‘This new path provides a valuable link in the Millennium Walk and connects up many other paths to provide excellent opportunities for walking in this lovely area. I know that local people have campaigned for many years to achieve this and we congratulate them on their success.’

The Millennium Walk leaflet may be found here.