We have called on Windsor and Maidenhead Council to incorporate a permanent, direct path across Battlemead Common, on the north-east side of Maidenhead, into the popular Maidenhead Millennium Walk. 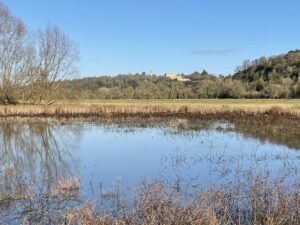 Currently walkers are denied access across this magnificent open space and forced to walk around the edge.  The land is owned by the council.

The Millennium Walk is an important path linking Hurley with Maidenhead Riverside which connects with the Thames Path National Trail at both ends and provides several pleasant circular walks.

Wildlife bodies are concerned that the route across Battlemead Common will threaten nature, but any conflicts could be managed by fencing the path.

Says Kate Ashbrook, our general secretary: ‘A new public path across Battlemead Common would be hugely beneficial to the public, providing a vital missing link in the Millennium Walk as well as offering a circular walk around the open space, and fine views of Cliveden.

‘If we want people to care about nature and get involved in its protection, we must enable them to enjoy it.  Banning access to Battlemead Common is counterproductive and would be a great loss to the public.

‘We urge Windsor and Maidenhead Council, at its meeting on 3 August, to agree to dedicate a path across its land and to incorporate it into the Millennium Walk,’ Kate declares.