Five years on, campaigners celebrated the success of open access to Worthing’s incomparable downland in the South Downs National Park.  They held a reunion rally on Sunday 15 August and made a video which includes our general secretary, Kate Ashbrook. 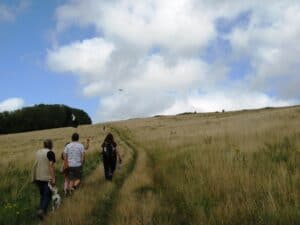 We backed the Worthing Downlanders’ campaign from 2009 to 2015, firstly to stop Worthing Borough Council from selling off its downs, and then to dedicate them for public access for ever.

The land is at Mount Carvey and Tenants Hill, adjoining the magnificent Cissbury Ring which already had rights of access.

The campaign kicked off with a rally on 14 November 2009, attended by hundreds of protesters.  Thanks to this, and to unremitting lobbying, the council conceded in 2015 and now the land is open for all to enjoy. 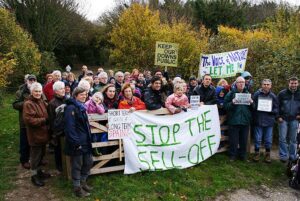 To celebrate the success of this campaign five years on, the Worthing Downlanders organised the reunion picnic on Sunday 15 August.

Said Kate Ashbrook, who spoke at the 2009 rally:

‘Worthing Borough Council has set a fine example by dedicating its land for public access.

‘Many publicly-important areas of downland were omitted from being mapped as access land under the Countryside and Rights of Way Act 2000, but landowners can dedicate their land, under section 16 of that act, to augment that limited access.

‘Local authorities own much downland which is not open to the public on the southern fringe of the South Downs National Park.  Yet people ought to be able to roam freely in these spectacular landscapes, the backdrop to the towns.  By providing public access the authorities can link the national park to its neighbouring conurbations and provide much-needed freedom and fresh air for the inhabitants, and visitors to the area. 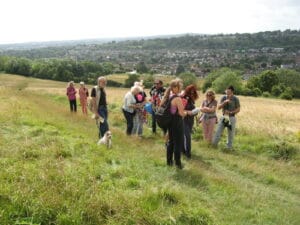 ‘Landscapes of Freedom has recently highlighted the lack of access to Brighton and Hove City Council’s downland on the edge of the city—just one of many examples.

‘The Open Spaces Society has championed public access to open spaces for the last 156 years, especially those close to where people live,’ sais Kate.  ‘As I stand here on the slopes of Cissbury Ring, looking down at the houses in the Findon Valley and beyond to Worthing, I can see just how important these downs are for public recreation.

‘We are delighted to celebrate the access which, with local people, we secured on Worthing’s splendid downs.’