The Winter Hill mass demo in 1896 was a milestone in the history of public access—but we still have a long way to go.’  So declares our general secretary Kate Ashbrook, who will speak on 5 September at the 125th anniversary event of the Winter Hill mass trespass.  Kate also spoke at the centenary event 25 years ago.

‘On 6 September 1896, ten thousand brave people from Bolton asserted their right to use Coal Pit Road, the main path to Winter Hill, which the landowner, Colonel Ainsworth, had obstructed with a locked gate, “keep out” notices, and gamekeepers.  While today we can enjoy that path by right, our freedoms are still being denied to us, though perhaps more insidiously. 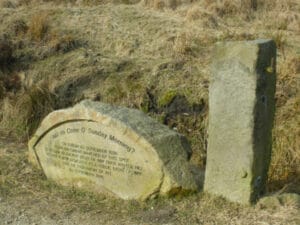 Stone plaque by the gate on Coal Pit Lane, installed on the centenary of the trespass in September 1996. Copyright:The Milestone Society.

‘Green spaces, where people have roamed free and children have played, are being trashed and built on apace.  Country paths are made hostile by fencing, CCTV notices and big gates.  Local authorities do not have the resources to defend paths and green spaces as they have done in the past, yet these have never been more valued for our health and well-being, as demonstrated by the pandemic,’ Kate argues.

‘Government is extending the criminalisation of trespass in ways which (although it claims will not catch innocent walkers, riders and cyclists) will create a mood of intimidation in the countryside.

‘We have yet to see the government honour its promise that post-Brexit agricultural subsidies will fund more and better access—yet there is a great opportunity here to ensure that landowners and famers promote public recreation in return for the public money they receive.  And government has refused to create targets for public access in the Environment Bill currently in parliament—despite the ambitions for access stated in its 25-year plan.

‘So it is a frustrating time for access campaigners, but we shall not give up.  The trespassers on Winter Hill 125 years ago set us a fine example and we shall for ever follow in their footsteps,’ says Kate.