Our general secretary, Kate Ashbrook, comments on the government’s lamentable failure to introduce public access into the new agricultural funding-regime. 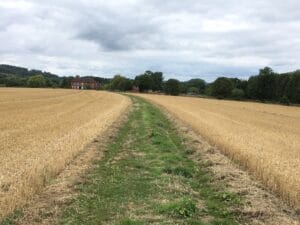 Colwall footpath 28 in Herefordshire. The Open Spaces Society says that farmers should be rewarded for keeping paths uncultivated.

We are dismayed that the government’s new, post-Brexit, environmental land management scheme (ELMS), published on 2 December, fails to offer payments for public access and paths on farmland. This is despite repeated commitments from ministers, during the passage of the Agriculture Bill and subsequently, that public access is a public good, to be funded through agricultural payments.

The document explains how the new Sustainable Farming Incentive, replacing the Basic Payments Scheme, will operate.

The Secretary of State for Environment, Food and Rural Affairs, in a speech to the Country Land and Business Association’s conference announced that the new scheme needs to have clear policy outcomes, which he then listed. Public access and enjoyment were not among them.

With other user groups, such as the Ramblers, British Mountaineering Council, British Canoeing, and British Horse Society, the Open Spaces Society has been calling for the agricultural funding system to pay for new and better public access. We have argued that such access should be by the creation of routes to help walkers, riders, cyclists and carriage drivers to avoid dangerous roads, and to form circular paths with greater opportunities to explore the countryside. Existing paths and access should also be improved, with cross-field paths left unploughed, green lanes rolled, and rights of way through grassland regularly mown.

We also argue that any landowner who blocks or abuses a public path should have grant payments withdrawn, with a much more efficient process than under the old regime, thereby deterring law-breaking and helping the hard-pressed highway authorities. But there is not a word from government about such common-sense enforcement measures.

Government pledged, in its 25-year environment plan of 2018, to make sure that our natural environment ‘can be enjoyed, used by and cared for by everyone’. The environment minister, Victoria Prentis, has subsequently said that ELMS ‘will include payments to ensure those goods can be delivered’—a point which has been echoed many times in parliament. Yet the big announcement on the future of ELMS says not a word about this.

This is a huge, missed opportunity to improve access and meet the targets in the 25-year plan, and to help with enforcement. We shall not give up, but will keep pressing ministers to listen to the people. We want better access, and we want it now.

The society along with the Ramblers, British Mountaineering Council, British Canoeing have published a joint statement today.