Rights of Way: Getting Decent Widths in Path Diversion Orders

A failure, A success – but how wide is it?

Defra has guidance here and The Planning Inspectorate has advice notes here.

Very few paths have their widths properly defined. Many paths are being restricted or fenced-in, mainly but by no means always near urban areas, this can greatly reduce the enjoyment and the physical security of path users. It is hard to counter (though not impossible) if there is no recorded width. Other paths are being diverted and the diverted path is sometimes unreasonably restrictive on width compared with the undiverted path.

Diversion Orders involve creating a new path (and deciding on its width).

Definitive map modification orders (DMMOs) record and define an existing path (including the width). These depend on evidence and are not covered here.

So what can we do about it?

Widths and Widths, what is the difference?

Some council officers and elected Members take the width of public paths to be the widths showing on the ground. That maybe the width worn through the grass (the beaten track) it may be the width of chippings put down across a muddy area, or in the urban context it may be the tarmac track, as in the picture at top right of this paper, the latter type often being 1.8 metres wide. But these are not the actual (legal) widths of paths.

Leicester County used to have, and may still have, a 1.8 metre (6 foot) path policy but they actually had the firm surface width in mind and normally required another three metres of grass on either side. So the effective recommended path width is 7.8 metres, nearly 25 feet.

If their 1.8 metres were made the legal width then, as with any path, it could be fenced in by the owners of the underlying land with two metre high security fences to that width without any permission being needed. This would be quite horrid so when considering widths of paths the overall width not the hardened width should always be thought of.And fencing-in should be imagined.

And of course the legal width, in orders and so on, must always be that overall width, whether or not all of it is readily usable by the public. 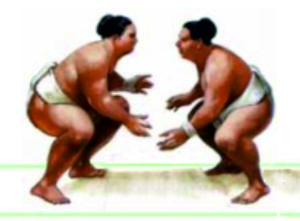 Some people think the law lays down path widths – it doesn’t. It is sometimes claimed to be one metre. Rubbish, they are misunderstanding the rules for keeping certain widths clear through crops.

It is sometimes claimed to be again about one metre because a judge said if the width were unknown then it should be ‘Enough for two persons to pass without quarrelling’. So far so good but that has often been interpreted as about one metre.

In my view that interpretation is very wrong. Below is a two metre path and it would be hard to pass without some quarrelling as it is. Just imagine if I had a small grandchild or two in tow. 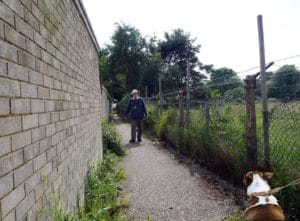 My Borough Council had until recently a recommended four metres minimum for footpaths. The rights of way review committee recommend at least four metres where a TCPA path may be fenced in (and what path mayn’t)

Look out for consultation notices

Diversions. This is the best stage to get involved. I can only speak here for Hertfordshire where most diversions are for landowner benefit and they are required to put up notices, look at these. Agents handle consultation and then the County decide whether to proceed. Sometimes the width, if initially inadequate (say 2 metres for a footpath) will be instantly widened on a complaint. Ask for more than you might expect, you may get it, and in any case aiming high helps prevent silly increases like going from 2 metres to 2.3 metres.

When the actual order is made, if the widths are still not good, object. You must object to the order after it is published, earlier objections will not be taken into account at this stage. If you are not an OSS local correspondent, it may be best to contact one or failing that the Ramblers rep or a local path group.

Look out for diversion order notices

Path orders have to have notices printed in newspapers and displayed on affected paths, look at these. If widths are inadequate write to the named Highway Authority, request a greater width. As above, seek help if needed.

There is no reason to stick to 19th/20th century narrow paths, I have a twenty three metre footpath (Diversion), and a thirty five metre bridleway (DMMO) both within half a mile of my house. The 35 metre width one is shown on the top right of this article.

This footpath, the subject of a diversion order, was made over 20 metres wide thanks to the work of Phil Wadey and myself. The whole width of this field is footpath. 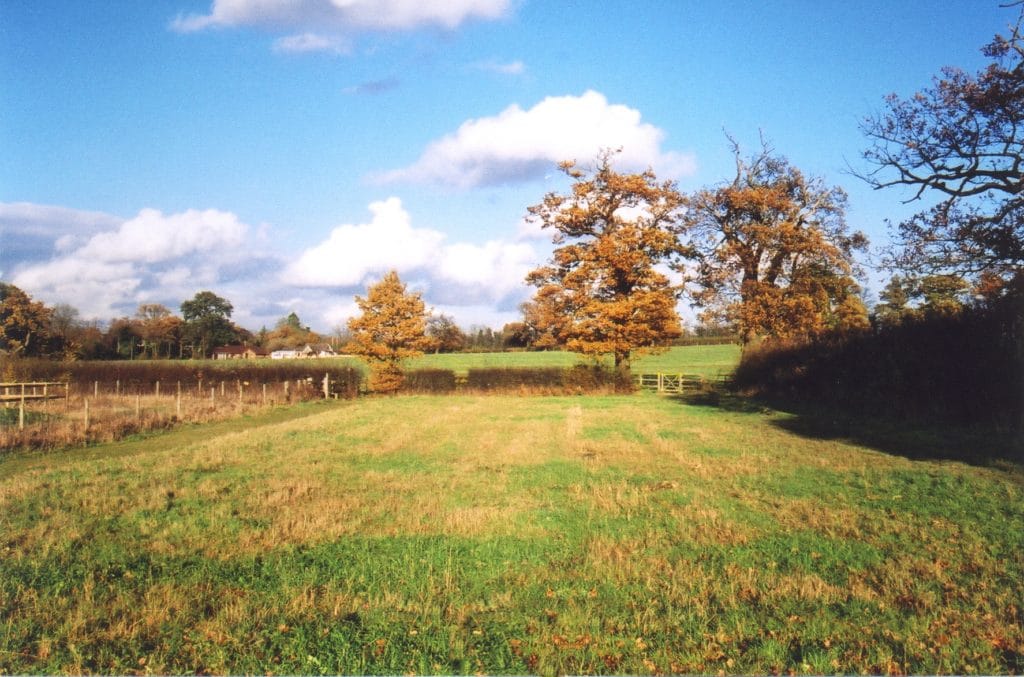 I would be pleased to get queries or comment on this paper by email phone or post: Chris Beney 12 Woodlands Road Bushey, Herts, WD23 2LR Phone: 01923 211113 E mail: chrisbeney@aol.com.

A copy of this information sheet is available to download here.

Back to top of page