We save Shropshire footpath from diversion3 min read

We have saved 100 metres of a footpath at Berrington, about four miles south-east of Shrewsbury, from being moved.

Shropshire Council promoted the proposal on behalf of the landowner. Because we objected to the formal order, it was referred to the Secretary of State for Environment, Food and Rural Affairs, and the Planning Inspectorate determined it on her behalf. The inspector, Mr Alan Beckett, refused to confirm the order. 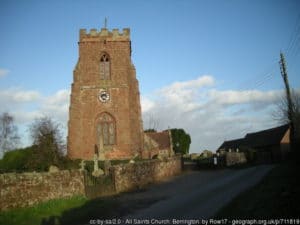 The path leaves the road which runs west from the A458 Cressage to Shrewsbury road, just west of the church. It runs south-west across the first field, and then south across further fields to Easton Mascott. The landowner and council wanted to move it to the other side of the first field, much closer to an existing route which heads in the same direction.

The inspector had to consider various tests for the diversion, under section 119 of the Highways Act 1980.

First, the council was required to show that the diversion was ‘expedient in the interests of the landowner’, in whose interests the order was made. The applicant said that he wanted to move the path to assist him in building a house close to it and he wanted the footpath to enter the field at the same point as his agricultural machinery which was on the proposed diversion. Also, he intended to reinstate a dried-up pond close to the path and it would be better in his view if ramblers did not walk through this area. Trees in a nearby copse were maturing and the roots underfoot made the footpath difficult for the less mobile.

Our local correspondent Harry Scott argued that the path was well away from the site of the proposed house; the diverted path would duplicate the existing nearby route and would be less convenient to walkers wishing to travel east to Berrington church; and there were no problems with the condition of the trees. The society did not consider that the diversion was in the interests of the landowner, and believed that it was against the interests of the public.

The inspector, following a site visit, noted that the footpath was approximately 15 metres from the projected house and ten metres from the pond, and that there was no evidence of hazards from tree roots. The inspector concluded that it was not in the interests of the landowner to divert the path.

He then considered whether the new termination point of the path was as convenient as the existing one. He noted that there was a clear line on the ground showing that the existing route ‘forms a popular link leading towards Berrington church, which would not be provided by the proposed diversion’ with its new terminal point. The existing route was more convenient for walkers wishing to travel east when they reached the road, and the diversion route would almost duplicate the existing footpath.

He therefore refused to confirm the order.

Says Harry Scott: ‘We are delighted that the inspector has rejected this pointless diversion. The existing route is so much better for walkers and we are pleased to have helped to ensure that it has not been moved.’