We save Herefordshire path from diversion2 min read

Our local correspondent Peter Newman has saved a path at Hope-under-Dinmore, four miles south of Leominster in Herefordshire.  Network Rail and Herefordshire Council wanted to replace a footpath, HD4, which crosses the Shrewsbury to Hereford railway line at grade, with a route to the north which passes under the railway and is used by vehicles.

When the formal order was published for public comment, the Open Spaces Society was the only objector, and Herefordshire Council referred the matter to the Planning Inspectorate for determination on behalf of the Secretary of State for Environment, Food and Rural Affairs. 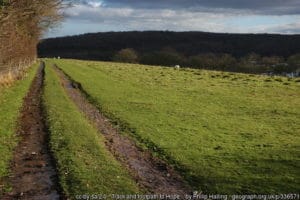 Photograph showing the well-used path which links to Hope-under-Dinmore on the western side of the railway, looking east. Copyright Philip Halling, Creative Commons Licence

The inspector, Mrs Helen Slade, issued her decision last month.  She refused to confirm the order.

While she recognised that some people might prefer to use the alternative crossing under the railway, she considered that the proposed diversion did not meet the tests in section 119 of the Highways Act 1980, the relevant legislation.

In particular, the proposed diversion took walkers further away from the routes to the west and south which were the most popular, as evidenced by the tracks on the ground.  In order to reach these routes walkers would have to use a footpath which ran south from the new diversion and which was unusable.  It was severely overgrown, and confined between two barbed-wire fences with a poor stile.  Despite its legal duty to maintain the path network, Herefordshire Council had admitted that it did not have the resources to open up this route.

The inspector agreed with the Open Spaces Society that the increased distance for walkers, and the poor state of the connecting footpath, outweighed any benefit from the safer crossing of the railway.

Says Peter Newman: ‘We are delighted to have saved this footpath for the use and enjoyment of walkers in Herefordshire’s beautiful countryside.  It is no good moving the footpath to a different crossing if walkers then cannot gain access to the paths they want to use.

‘It is excellent that the inspector has upheld the objection from the Open Spaces Society.’