We have objected to a planning application from the East Allenheads Estate which would damage part of Allendale Common in Northumberland.  The application is for a helicopter-landing area with concrete hard-standing.

The applicant claims that this is a retrospective application to re-surface an existing helicopter landing, but the Open Spaces Society and other objectors argue that the existing helipad has no planning permission and therefore the application should be for a new helipad. 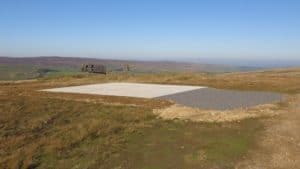 The society says that because the helipad is on registered common land, it would in addition need the consent of the Secretary of State for Environment, Food and Rural Affairs for works on common land under section 38 of the Commons Act 2006.  There is a public right to walk over the whole common.  In addition, a public footpath runs past the site and users of the route would be severely inconvenienced and put at risk from the proximity of the helipad.

In addition to the OSS and the parish council, objections were made by Natural England, the RSPB, and Northumberland County Council’s Area Countryside Officer (the last of these objected on the grounds that the helipad is unacceptably close to the public footpath, and there is no proposed procedure for alerting pedestrians to the potential danger).

Says Kate Ashbrook, our general secretary: ‘We are strongly opposed to this development on common land in an Area of Outstanding Natural Beauty.  It is misleading for the applicant to claim that the application is merely to resurface a helipad which already exists when that helipad has neither planning permission nor consent under the Commons Act.

‘It is extraordinary that the applicant’s planning statement does not even mention that the site is common land.

‘We trust that Northumberland Council will refuse planning permission for this pernicious development.’