We have recently learnt of a group in Carmarthenshire called Walking Well.   It is a Welsh Government initiative designed to help those who want to get fitter, or just to stay fit.  Carmarthenshire is extremely rural with a low population, and there are a large number of paths for the poorly-resource county council to deal with.

Nigel Bailey, a walk leader with Walking Well, has sent us a report.

In Llanwinio, an exceptionally lovely community in Carmarthenshire with five villages, many paths have lately been reopened and signed, thanks to the rangers of Carmarthenshire County Council.  Nigel is delighted with the progress made.  He explains that Walking Well is a friendly group, not aggressive about covering long distances or going fast. 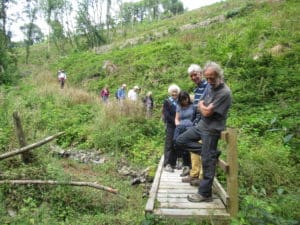 A particular triumph of Carmarthenshire County Council rangers in the past year has been the reopening and signing of seven rights of way over Llanwinio Common and simple bridging on the Cistercian Way.  More work is to follow.  Many of the paths go back to the year 1000 CE and the ancient Lords of Cilsant, a fascinating dig into history in an area full of heritage.

With Nigel leading, the group had a celebration at Llanwinio community hall.  This is at the head of bridleway 19/41, the Llanwinio end of an ancient pilgrim route to the church originally founded in the sixth century.

The group will help to keep the paths open and clear by walking them regularly.