We have objected to a planning application from Tara Getty for deer fencing alongside and across a public bridleway.  The route runs past Mr Getty’s Twigside Farm at Ibstone, in the heart of the Chilterns Area of Outstanding Natural Beauty.  Tara Getty is grandson of oil tycoon, J Paul Getty.

The Open Spaces Society, Buckinghamshire Ramblers, Buckinghamshire County Council and Ibstone Parish Council have objected principally because of the adverse effect on people’s enjoyment of the bridleway.

Mr Getty wants to erect 1.8-metre-high deer fencing alongside part of the route and then across it, moving the bridleway off line. 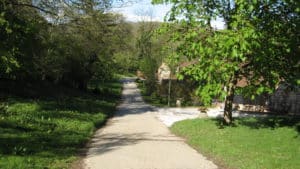 We said that Twigside is in a lovely, quiet valley in the heart of the Chilterns Area of Outstanding Natural Beauty.  Deer fencing would be an eyesore in the AONB and in particular for users of the bridleway which is an attractive, open route with a wide path on a direct line.

The fencing would result in the path being narrowed in two places, causing a pinch point for walkers, riders and cyclists; this would adversely affect their enjoyment and ease of use.

The path would also need to be shifted off its true line which would require a further formal diversion order under the Town and Country Planning Act 1990.  We would object to this and it would have to be determined by the Secretary of State for Environment.  The path could not be moved unless this diversion order was confirmed.

We believe the fencing would also obstruct a footpath which runs to the north of the bridleway.

With electronically-controlled gates, this would make the whole area appear private, threatening and urban.  Already the owner has erected discouraging notices about CCTV; the fencing would make this situation worse.  We have urged Wycombe District Council to reject the application.