Our member Tony Fincham has achieved success in a long campaign to get two obstructed paths reopened at Stinsford, a mile east of Dorchester in Dorset. 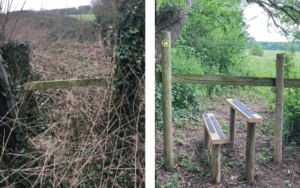 Before and after: Stinsford footpath 40 near Dorchester. Photo: Tony Fincham

Tony is a vice-president of the Thomas Hardy Society and regularly leads walks for the society in the vicinity of Hardy’s home at Stinsford.  He has found two paths in the parish to be obstructed—paths which it is likely Hardy himself walked.  Stinsford bridleway 40 was blocked by two fences, several locked gates and in summer a crop, and footpath 40 was obstructed by overgrowth and two broken stiles.

Tony reported these problems to Dorset Council many times but the council did nothing.  Then, on the advice of the society, Tony served notices on the council, under section 130A of the Highways Act 1980, to require it to carry out its duty and reopen the paths. 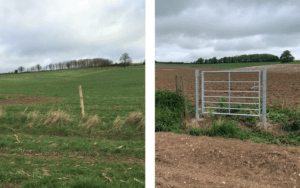 Before and after: Stinsford bridleway 40 near Dorchester. Photo: Tony Fincham

This tactic has worked and the council has installed new stiles on the footpath, and gates on the bridleway.

We congratulate Tony for his persistence, and are pleased that the Thomas Hardy Society and the general public can now enjoy these paths unobstructed.