We are celebrating the registration of Cassiobridge Common in Watford as a ‘new’ common. Hertfordshire County Council has approved its own proposal to register the common for the first time, which will ensure it is protected from development and encroachment. 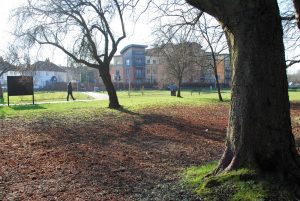 Hugh Craddock, one of our case officers, explained: ‘Cassiobridge Common, also known as Cassio Common, has been here for as long as anyone can remember, sandwiched between Cassiobury Park, the River Gade and the old Reading to Hatfield turnpike. Now, it is one of those small recreational open spaces that are so important in urban areas.

‘For unfathomable reasons, in the 1960s, the local council obtained the Minister’s consent to exclude Cassiobridge Common from registration under the Commons Registration Act 1965. Consequently, it was at greater risk of encroachment or loss, because it was not recognised as registered common land. Indeed, parts of the common have already been lost to road widening and housing.

‘Now, Hertfordshire County Council has rectified that omission, by using its powers under Part 1 of the Commons Act 2006 to add Cassiobridge Common to the commons register for Hertfordshire. This will ensure that the existence of the common comes up in local authority searches when land nearby is being bought and sold, and that works on the common can take place only with the consent of the Secretary of State for Environment, Food and Rural Affairs.

‘It will also confirm the validity of the scheme of regulation and management under the Commons Act 1899 which applies to this common, and it ensures that the management of it remains in the hands of Watford Borough Council.

‘We are delighted that Hertfordshire County Council has acted to register Cassiobridge Common. There are around 38 commons in England which were exempted from registration, and this is one of just two in areas pioneering the implementation of Part 1 of the Commons Act 2006 which are now once again eligible for registration. This shows what can be achieved by an authority with pioneer powers where it acts in the interests of the public by seeking to protect its commons. We call on North Yorkshire County Council to take the same initiative with the common excluded from registration in its area, at Harrogate Stray.’