We are deeply disappointed that the Secretary of State for Transport, Mr Grant Shapps, has ignored the needs of pedestrians and approved a major scheme for the improvement of Junction 6 of the M42 in the West Midlands.

The society is concerned that the development will sever principal routes running east-west and to Birmingham International Station. 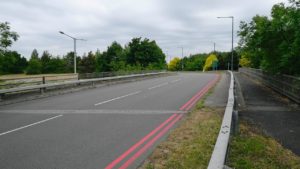 The picture shows the bridge across the A45 where Highways England proposes to provide an extra traffic lane, and says there is insufficient width to retain the important footway and that the bridge could not be widened

Says Richard Lloyd, our local correspondent for Solihull:
‘Ironically, in his recent advice to local authorities on traffic management in response to covid-19, Grant Shapps wrote: “The government therefore expects local authorities to make significant changes to their road layouts to give more space to cyclists and pedestrians”. In the light of this it is particularly deplorable that a key footway is being sacrificed for conversion into a roadway.’

The Planning Inspectorate examining authority’s Report of Findings and Conclusions of 21 February 2020 set out the dire situation. The report states that while ‘the applicants assert that the scheme is deemed to maintain or improve connections between people and communities by providing high quality non-motorised user routes … the reality is quite different. The mainline link road is shown to sever several public rights of way. Although links are maintained, they are, without exception, longer, less convenient and often less pleasant.’ (paras 5.2.80-81).

The Planning Inspectorate considers that the approach to the provision of footpaths and non-motorised user links fails to accord with the requirements of the National Policy Statement for National Networks (5.2.91).

Nevertheless, the scheme has been given the go ahead. Richard Lloyd continues:

‘It would not have been like this if good (or improved) pedestrian access had been an objective at the start of the project, in line with existing national policy. Relatively small adjustments to the layout could have been made in the initial phases. At the worst pinch-point on the main north-south route, all that was needed was an extra metre of width, while preserving the principal east-west route required a footbridge across a deep road cutting that did not intrude into the safety zone of the nearby airport.

‘For example, public footpath M106 (the Green Man Trail) and footways alongside the B4438 provide an important link between Birmingham International Station and the extensive footpath network south of the A45. The station is also a hub for bus services. A dedicated pedestrian route here is essential. Instead, the scheme proposes a major diversion, largely alongside a busy road, tortuously indirect, and 15 minutes longer to walk.’ 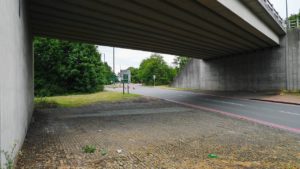 The picture shows the underpass beneath Airport Way where Highways England proposes to provide two extra traffic lanes, and says there is insufficient width to retain the footway on the far side and a separate tunnel could not be provided.

The society submitted proposals and explanations to the examiners, seeking detailed design investigations to mitigate the worst impacts on non-motorised users. Unfortunately, Highways England and its contractors did not want to re-visit their earlier work, and would not accept offers of engagement.

Richard concludes: ‘The Inspectorate’s report offers some hope of small improvements to the scheme, and we trust that these will be pursued by Highways England and the local authority. The covid-19 pandemic has indicated again the value of green spaces and non-motorised transport, yet for now the message does not seem to have reached those making decisions in the Department for Transport.’