Our local correspondent for south Derbysire and north west Leicestershire since 2010, Barry Thomas, has updated his book ‘The old ways of Melbourne – the history of public rights of way in a Derbyshire village’. Barry describes the nature of public rights of way and the history of the path network in the parish of Melbourne in south Derbyshire based on research covering the period since the late 18th century.

Here is an introduction to what he has written: 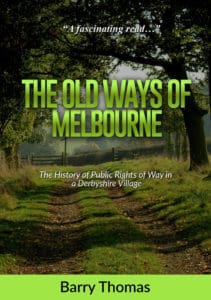 Melbourne has a large network of Public Rights of Way which link the village centre to local farms, industries, hamlets and villages. Although this system developed over a thousand years we do not get a clear picture of these until the inclosure of the village between 1787 and 1791.

Many of the paths, especially those close to the village centre, were named after local features and places. We owe the survival of much of the path network to Melbourne Parish Council. This body did much to maintain the local path system from the end of the 19th to the middle of the 20th century in the face of opposition from large landowners who tried to obstruct the path network, especially the estate owners and their agents at Donington Hall and Calke Abbey.

In the mid-20th century the building of the Melbourne Military Railway (1939-1944) and construction of the Staunton Harold Reservoir (early 1960s) were to have long lasting negative effects on our footpaths and bridleways.

Local people and organisations have been instrumental in preserving our footpaths and bridleways. These include A J Collyer, the first Parish Council Clerk, the two George Calows, father and son who built so many of our stiles and bridges, Parish Clerk Albert Andrews who managed the 1950 parish survey for the 1949 Act that led to the production of the Definitive Map. Since the 1970s this work has been carried on by the Derbyshire Footpath Preservation Society, the Derbyshire Ramblers and more recently by the Melbourne Civic Society and the Melbourne Footpaths Group.

The book (second edition) has 68 pages, is an A5 size paperback and is well illustrated in colour.

Sample pages and details of how you can obtain a copy can be found here.