We have welcomed news that Oyster Wharf, part of the seafront at Mumbles, will remain a public place.

In 2017, application was made by Nextcolour Ltd to Swansea Council for planning permission for development at Oyster Wharf, in which the wharf was described as: ‘Area to be closed off to vehicles…and used as public realm/piazza’.  But, contrary to that intention, application then was made by Nextcolour Ltd in 2020 to the Welsh Ministers for an order to stop up all highway rights over the wharf.  The effect of the order, if granted, was that the public would lose their right of access to the wharf, and be dependent on whatever access the owner chose to permit. 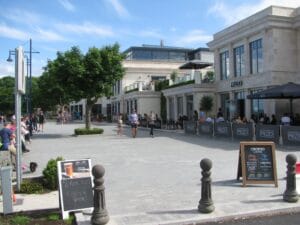 The society objected to the order, and proposed instead that rights for motor vehicles should be stopped up, so that pedestrians and cyclists could continue to use the wharf by right.  The council and the developer argued that stopping up all rights was necessary to exclude vehicles, to permit the lease of the land, and to facilitate use for outdoor tables etc—but the society responded that none of this required the extinguishment of public rights over the wharf.

Nextcolour Ltd has now withdrawn its application for stopping up prior to a public inquiry into the application.

Commenting on the withdrawal, one of our case officers, Hugh Craddock, said: ‘We are pleased that the stopping-up has been abandoned, although it always obviously was unnecessary to enable development at the wharf.  The stopping-up was really about transforming a public place into privatised space, used by the toleration of the owner and subject to the owner’s own terms of conduct.  It would have been open to the owner, for example, to exclude people from sitting down other than at restaurant tables.’

Hugh continued: ‘We ask the council to review the use of the wharf by motor vehicles, and consider whether a traffic regulation order should be made to exclude them so that the existing pedestrian and cycle use can be reinforced by rules on vehicular use.’

In an application for planning permission to the City and County of Swansea Council under reference 2017/1666/FUL, Oyster wharf is labelled (drawing 137D) as: ‘Area to be closed off to vehicles (Apart from Emergency Vehicles) and used as public realm/piazza’.

The stopping-up order was made by the Welsh Ministers under s.247 of the Town and Country Planning Act 1990 on the application of Nextcolour Ltd.  The order was made on the ostensible grounds that, ‘…it is necessary to [stop up] in order to enable development to be carried out—(a) in accordance with planning permission…’.  The society objected to the order on the grounds that stopping-up would be contrary to the intention of the planning permission, which is to retain the order land as ‘public realm’.  There is no other provision in the planning permission which would achieve that outcome, if highway rights were removed.

The society stated that it has no objection to the making of an order which reserves public restricted byway or public bridleway rights over the entire area, so that the order land remains highway accessible to all unmotorised vehicles (in the case of a restricted byway) or cycles, equestrians and foot passengers (in the case of a bridleway).  This proposal was not adopted by the applicants.

It is open to the council to make a traffic regulation order under section 1 of the Road Traffic Regulation Act 1984 excluding motor vehicles from the wharf.