We have objected to plans by the Welsh Government to stop up a public highway on the foreshore side of Oyster Wharf at Mumbles, Swansea.

The Transport Orders Branch of the Welsh Government has made an order under section 247 of the Town and Country Planning Act 1990 to stop up the highway—but it can only do so if the grounds are to enable development to be carried out.  The development, for which planning permission has been granted by the City and County of Swansea Council (2017/1666/FUL), is to construct a new access road onto Mumbles Road and to lay out car-parking spaces to facilitate the use of the land in question as pedestrian and ‘public realm’ space. 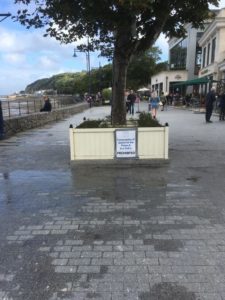 The land (public highway) which is threatened with stopping up

The society points out that it is not necessary to stop up the highway to enable development to be carried out, and in fact the stopping up is entirely contrary to the permission granted.

Hugh Craddock, one of our case officers, explains: ‘The council wishes to close off the area to vehicles and for it to be used as public realm and plaza.  It wants to exclude vehicles for the better management and amenity of this public space; it does not intend that the land should cease to be highway.  Indeed, the land cannot remain as public realm unless it remains as public highway.  If the highway is stopped up, control of the land will revert to the owner of the subsoil, and the public will cease to have any right to be there — public use will be entirely at the discretion of the landowner.

‘We have told the government that the ministers do not have the power to make the order as drafted.  We have no objection to the making of an order which reserves the rights of walkers, horse-riders, cyclists and unmotorised vehicles over the entire area, ie making the area a public bridleway or restricted byway.

‘The order is also at fault in not stating the date on which the highway would be stopped up, leaving the public ignorant of when its rights would cease.

‘However, we trust that the ministers will withdraw the current order and replace it with a correct one, to protect people’s rights to enjoy this attractive part of Mumbles.’

As of the 1st April 2021, we are awaiting details for a public inquiry, which is most likely to be held virtually later this year.