We are delighted that a public path has been added to the official (definitive) map of Norfolk’s public rights of way, thanks to the work of our local correspondent, Ian Witham. 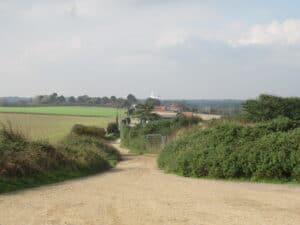 View along the newly-recorded route

The mile-long route runs between the B1145 road (between North Walsham and Mundesley) to the sea just south of Mundesley.  It has been recorded as a restricted byway, confirming the rights of walkers, horse-riders, cyclists, and carriage-drivers to use it.  Although it has been used and enjoyed for centuries it had not been recorded and therefore was not shown as a public highway on Ordnance Survey maps.

Says Ian: ‘This is an attractive and popular route in the Norfolk Coast Area of Outstanding Natural Beauty.  It gives access to the coastal cliff top which was hailed by author David Yaxley, in Portrait of Norfolk (Robert Hale, 1977) as ‘certainly the finest open stretch of raised coastline in the east of England’, prior, at least, to the construction of Bacton Gas Terminal in 1967.

‘Unfortunately, Natural England has chosen to align the new coastal path and access land at the bottom of the cliffs.’ 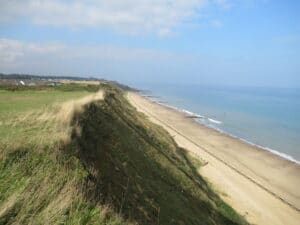 The Norfolk coast, from the east end of the newly-created route

Ian continues: ‘Part of the route will require clearance works in order to restore it to a fit state for carriage use, and I shall keep an eye on this and press Norfolk County Council, the highway authority, to take the necessary action.’

Adds Helen Clayton, our rights-of-way case officer: ‘We congratulate Ian on his achievement, which secures this route for ever.  It is important to submit applications for unrecorded paths before the proposed closure, on 1 January 2026, of the definitive map to new applications for routes based on historic evidence.’

Read about other path news in Norfolk and surrounding areas here.