Today (29 June) the Open Spaces Society, Britain’s leading pressure group for common land(1),celebrates the centenary of the Law of Property Act 1922.  Thanks to the efforts of the society, the bill was amended in parliament to give the public rights to walk and ride on certain commons, and protect commons from enclosure and encroachment. 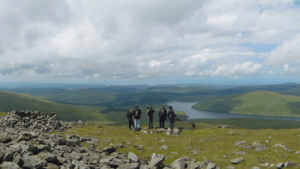 Panorama of Pumlumon common in mid Wales. In 1932 the landowner, the Crown Estate, voluntarily granted a right to walk and ride on all its commons (30,000 hectares in Wales) under section 193 of the Law of Property Act 1925. Photo: the late Liz Fleming-Williams.

The society (then known as the Commons, Open Spaces and Footpaths Preservation Society) was concerned that the Law of Property Bill was to abolish copyhold, the form of land tenure whereby tenants’ rights, including rights of common, were recorded by the manorial courts.  When attempts were made to enclose commons, the society always referred to the manorial records to ascertain the existence of common rights.  Under the proposed act, this would no longer be possible.  The society also feared that landowners would buy the common rights: without rights, the commons would be lost.

As a result of the society’s lobbying, the government inserted two clauses in the bill, which became sections 102 and 103.

Section 102 gave the public the right to walk and ride on every common or piece of manorial waste in the Metropolitan Police District(2), or wholly or partly in any borough or urban district, and any rural common to which the provision was applied by the landowner.  Section 103 required the minister’s consent for any works on land which was subject to common rights on 1 January 1926.

The 1922 act did not come into force.  Instead, by a subsequent consolidation act, these sections because section 193 and 194 of the Law of Property Act 1925.  But their origins lie rooted in long debates and negotiations on the 1922 act.

Comments Kate Ashbrook, general secretary of the Open Spaces Society: ‘Thanks to the society’s foresight and lobbying, these vitally important provisions for commons became law.  However, commons still do not receive the protection they deserve, nor is there a right to ride on all commons.

‘The society is always ready to seek an opportunity to achieve greater rights and protection for our precious commons.’

[1] Common land is land subject to rights of common (exercised by ‘commoners’), to graze animals or collect wood for instance, or waste land of the manor not subject to rights. The public has the right to walk on most commons, and to ride on many (thanks to the Countryside and Rights of Way Act 2000 for walkers, and section 193 of the Law of Property Act 1925 for riders). Works on common land require the consent of the Secretary of State for Environment, Food and Rural Affairs, via the Planning Inspectorate, or Welsh Ministers, under section 38 of the Commons Act 2006 which superseded section 194 of the Law of Property Act 1925.

[2] The Metropolitan Police District was as defined at the passing of the Metropolitan Commons Act 1866, comprising most of what is now Greater London, and some adjoining parts of Essex, Kent, Hertfordshire, Surrey. It included, for example, Epsom Common.