We are dismayed that councillors in Bristol have approved plans for a café on the city’s glorious downs, close to the Avon Gorge.  We have called for radical reform of the nineteenth-century Downs Committee, which put forward the plans. 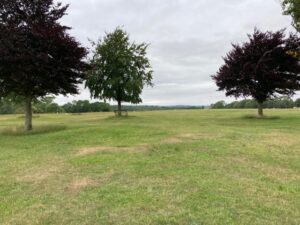 The sense of wildness on the Downs would be marred by the proposed café and associated paraphernalia. Photo: OSS

Bristol’s iconic sea-walls are a wholly inappropriate site for a café.  It will spoil the view and the sense of wildness over a wide area.  It will bring increased traffic and congestion to an already busy part of the Downs.  The applicant has, ludicrously, attempted to justify this significant development by arguing that the provision of four toilet-cubicles is of public benefit, yet these are fewer than in the unobtrusive toilet block the cafe would replace.  This proposal is clearly contrary to Bristol City Council’s planning policies, and we argued that it should be rejected.

The Downs Committee, set up to manage the Downs under the Clifton and Durdham Downs (Bristol) Act 1861, urgently needs reform.  It has a single statutory remit: to keep the Downs open and unenclosed ‘for the public resort and recreation of the citizens and inhabitants of Bristol’. The 1861 act gives the committee no powers to build or operate a café.  The society’s view—which we explained in detail to the planning committee—is that its proposal is unlawful.  If the Committee presses ahead, it risks another expensive High Court challenge.  The challenge to its licensing of zoo parking on the Downs cost an estimated £620,000.

Says Kate Ashbrook, our general secretary: ‘The Downs Committee needs to focus on improving the Downs for recreation, not on these distractions. It is unfit for purpose and needs radical reform.’

At its meeting on Wednesday 29 June, Bristol’s Development Control Committee B approved, by five votes to three, a proposal to replace a toilet block on the Downs with a café and education booth.  The development would include four toilet-cubicles open to the public which the café is intended to fund.

The proposed development was given planning permission in 2019.  This has now lapsed.  At its April meeting the Committee decided not to grant permission and instructed officers to draw up reasons for refusal.  Officers have done this but nonetheless still recommended approval.

History of building on the Downs

The 1861 Downs Act requires the Downs Committee to manage the Downs so that it is kept ‘for ever open and unenclosed’.  As Gerry Nichols records on page 25 of his booklet, To keep open and unenclosed: the Management of Durdham Down since 1861 (available here), this ‘has always been interpreted as a ban on permanent buildings on the Downs’.  He goes on to explain that the land by the Water Tower owned by the Bristol Water Works Company has therefore been used for buildings to avoid challenges.  On page 40, he explains that the toilets (rebuilt in 1963) are on the site of a World War II latrine block.  This is the only WWII temporary building that the then Downs Committee allowed to remain.

Not only does the proposed development contravene the general provisions of the 1861 Act, but also the Downs Committee can only operate using the specific powers it has been given.  The Open Spaces Society is of the view that the Committee has no powers to build or operate a café.