‘The new agricultural-payment regimes in England and Wales provide a perfect opportunity for farmers and landowners to give public access a leg up.’ So declared our chairman, Phil Wadey, in his keynote speech to the society’s annual general meeting in London today (7 July). 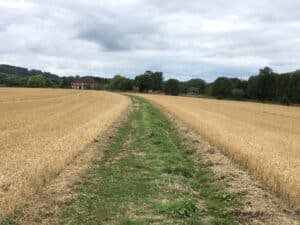 Footpath in Colwall, Herefordshire: farmers could be paid to leave cross-field paths undisturbed like this one. Photo: OSS

‘The Westminster government and the Wales Senedd have agreed that farmers and landowners should receive agricultural payments to provide more and better public access.  Ministers have repeatedly promised that this will happen.  However, we have yet to see any action on the ground and, with other recreation bodies, are pressing for this to be implemented as soon as possible.

‘At its simplest, payments could be made for farmers to improve the existing public paths, for instance by increasing their widths; regularly mowing field-edge paths and keeping them clear of vegetation, leaving undisturbed paths which run across fields through crops or grass leys; mowing and rolling green lanes; removing stiles and replacing with gates where some barrier is needed; and improving signposting and waymarking.

‘These improvements will help to give the public confidence of where they can go on farmland, and enable them to exercise their rights without stress and worry.  It should encourage more people to get out and enjoy walking, riding and cycling.’

Phil continued: ‘Where increased payments are available, farmers should be funded to provide new access where people want it, such as a field-edge path to avoid a busy road; circular riding-routes; a safe road-crossing, or a path to a river for those with kayaks and canoes.  But there must be strong local engagement, to ensure that new access responds to local need.

‘We also want to see effective enforcement, so that those who receive subsidies have their payments docked if they are not observing the law on public paths on their land, for instance if a path is obstructed by crops.  That will require a proper system of checks and reporting, but it will be cost-effective because it will reduce the burden on hard-pressed highway authorities who currently have to carry out such enforcement.

‘We were encouraged yesterday that the Welsh Government published its Sustainable Farming Scheme outline proposals for 2025, which do include payments for enhanced access.

‘The Westminster government pledged in it 25-year environment plan, published in 2018, to make sure that our natural environment “can be enjoyed, used by and cared for by everyone”.  These proposals for agricultural funding could make that pledge a reality,’ said Phil.