We are delighted that a Norfolk parish council has withdrawn consent for works on the local common, ensuring that the land can remain free and unencumbered. 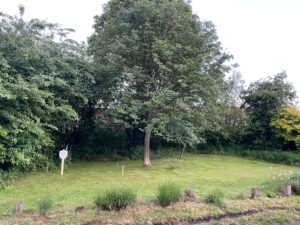 The common is a tiny (one-eighth of a hectare) patch of land south of Broomsthorpe Road in East Rudham, six miles west of Fakenham.  It is owned by the parish council.  Eastern Power Networks plc applied under section 38 of the Commons Act 2006 for consent to install a three-metre square electricity substation here, made of glass-reinforced-plastic, with associated cabling.

The society, which is notified of all such applications, objected, saying that the common is the old site of the village pond, situated within former allotment gardens, and is a pleasing amenity for the village—in effect a tiny village green.

The society considered that the development would be ugly and would dominate the common, and would threaten a mountain ash tree growing on it.  The society questioned why it should be sited here rather than off the common.  The purpose of section 38 is to allow works which will maintain or improve the condition of the common and confer some public benefit.  This development does none of those things.

Local people, from Broomsthorpe Road and Back Lane, also objected and pressed the parish council to refuse to allow this development on its land.

The council relented and has told Eastern Power Networks that it refuses its permission.  Thus, the application has been withdrawn.

Says Hugh Craddock, one of our case officers: ‘This is an excellent outcome.  The development would have dominated this tiny green space and completely altered its character.  We are delighted that local people have protested and that the parish council has withdrawn consent so that the common remains unimpaired for all to enjoy.’