The government’s proposals to strengthen police powers against trespass could make criminals of innocent people visiting the countryside.  We have expressed this fear in our response to the Home Office consultation on the criminalisation of trespass in England and Wales. 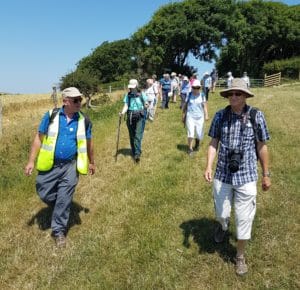 The Conservative manifesto declared ‘We will make intentional trespass a criminal offence.’  Before this, the Home Office published a consultation, ‘Strengthening police powers to tackle unauthorised encampments’. ‘While supposedly aimed at unauthorised travellers, the proposals are ambiguously presented, and potentially extend to anyone who ‘knowingly’ trespasses.’

Says our case officer Hugh Craddock: ‘Our immediate fear is for wild campers and peaceful protest-camps, but once trespass is criminalised it could easily lead to innocent people being made criminals.

‘Trespass is commonplace and many people trespass without realising it—for example, by sitting on a residential wall while waiting for a bus, or cutting across a forecourt, or reversing into a driveway to turn a vehicle.  People who are out for a walk or ride might stray from the path to avoid a muddy patch or tricky stile.

‘The effect of all this could be to make visitors to the countryside nervous of doing the wrong thing, and landowners more empowered to challenge them.

‘We are therefore deeply concerned by the government’s proposals and will fight every inch of the way against further criminalisation of trespass,’ says Hugh.