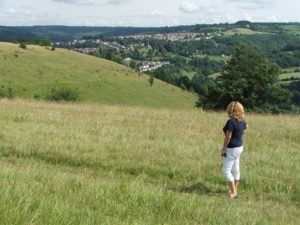 ‘All common land is special because it is a remnant of the much more extensive commons which existed before the inclosures,’ Kate explained.  ‘Minchinhampton and Rodborough are particularly important because of the immense public interest there.

‘They are owned by the National Trust and are in a designated landscape, the Cotswolds Area of Outstanding Natural Beauty.  Much of the commons is a scheduled ancient monument, this is because of their historic landscapes which can be traced back to the iron age.  They are designated as a Site of Special Scientific interest, and Rodborough Common is a Special Area of Conservation.  The public enjoys rights of access, on foot and horseback, to the whole area.  And they are protected by many laws, including the Law of Property Act 1925 which means there is no right to drive or park a vehicle off the road.

‘They are immensely popular because they are so close to the Stroud valley towns.  The commons are grazed, largely by cattle, to maintain the exquisite limestone grassland with its rich biodiversity, and they are unfenced which enables people to enjoy the freedom, open landscape and fine views.  But we appreciate that this gives rise to conflicts, particular with traffic speeding across the commons.

‘There are already speed limits on some commons, on Dartmoor and in the New Forest for instance, but they are too often ignored and need greater enforcement.  On Dartmoor, which has a 40-mph speed limit on many roads across the commons, the Dartmoor Livestock Protection Society reports that in 2019 there were a shocking 179 collisions involving livestock, with 137 animals killed. 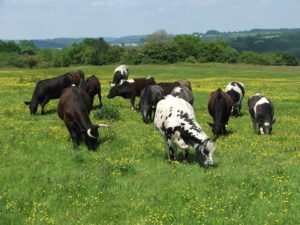 ‘The Open Spaces Society would like to see an enforced 20-mph speed limit on the unfenced roads across Minchinhampton and Rodborough Commons, and every other common in England and Wales.  We shall be pleased to assist in developing such a campaign,’ said Kate.