Our commons re-registration officer Frances Kerner gave an illustrated talk on 29 February 2020 at Downley Memorial Hall entitled, Downley Common, its Origin and Survival within the Manor of West Wycombe. 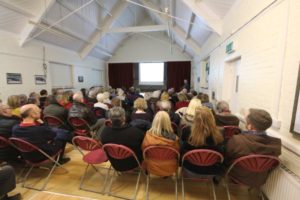 The hall was packed, with 92 people present. Frances’s talk traced the general history of common land, including its survival and loss. As an important part of the manor, common land provided much valued natural resources for local people but as systems of agriculture changed, so too did common land and much was lost over time. Downley Common, unlike neighbouring commons that were lost, survives as a cherished open space but why did this happen ? Frances offered an explanation as she traced how the manor governed the common.