Mr Tara Getty, grandson of oil tycoon John Paul Getty, has withdrawn his controversial planning application for deer fencing alongside and across a public bridleway, making the route appear private. The bridleway runs past Mr Getty’s Twigside Farm at Ibstone, in the heart of the Chilterns Area of Outstanding Natural Beauty.

Mr Getty wanted to erect 1.8-metre-high deer fencing alongside part of the route and then across it, installing electrically-controlled gates, moving the bridleway off line and creating pinch points.

Although Mr Getty gave no reason, his withdrawal may have been because the application was strongly opposed. The objectors were Buckinghamshire County Council as highway authority, the Chilterns Conservation Board, Ibstone Parish Council, the British Horse Society, Chiltern Society, Cycling UK, Buckinghamshire Ramblers and ourselves. Wycombe District Council, the planning authority, told Mr Getty that it disliked the design of the deer fencing and gates.

We are delighted that Mr Getty has withdrawn his obnoxious application. This is a beautiful, quiet valley in an area of immense beauty, and the fencing and electronic gates would have made it appear private as well as being a blot on the landscape. The objectors argued that you cannot in any case use a planning application to move a public highway.

We trust that Mr Getty will abandon any plans to mess about with this splendid, direct and much-loved bridleway through the valley. 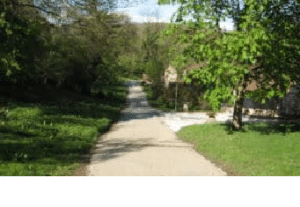