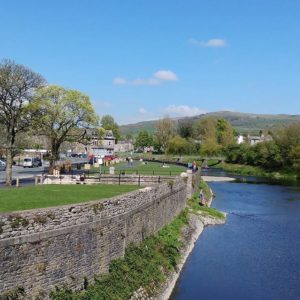 We have objected to plans to reinstate an unlawful car park on New Road Common, Kendal in Cumbria.

Mr David Fone has applied to the Secretary of State for Environment, under section 38 of the Commons Act 2006, for consent for works on common land. Mr Fone is a private individual and the land is owned by South Lakeland District Council. The Open Spaces Society and Friends of the Lake District (FLD) are among the objectors.

We say that the land should be open and available for public enjoyment. The public has the right to walk here but is unable to do so when the land is covered in parked cars. The site, being next to the River Kent, provides an excellent open space for the inhabitants of Kendal and its neighbourhood, and it significantly contributes to the sense of place and character of the town.

Furthermore, we point out that the common is covered by a scheme of management which requires that the landowner gives consent. South Lakeland District Council has given no such consent. The scheme and bylaws make the parking of any vehicle on the common illegal without the council’s consent, and the Secretary of State cannot grant permission for an illegal act.

The society notes that the landowner has not cared for the land well, but over the last decade, the society and FLD have worked with the council to start to rectify the inappropriate uses of the common. These include unlawful car parking and contamination of the ground with oil products which could potentially be released into the adjacent site of special scientific interest and the River Kent. The council has largely removed the pollution and restored the land to public use.

Says our spokesperson Ian Brodie: ‘It is imperative that this vexatious application is quickly dismissed and that the people of Kendal and visitors to the town can enjoy the security of this increasingly valued riverside green space.’ 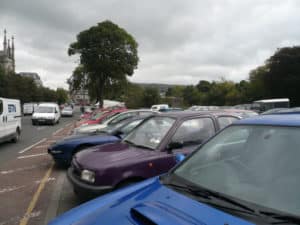 Before see above and after above right