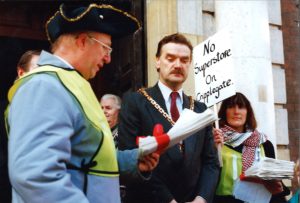 Dressing up as a town crier, helping to prevent Cripplegate Park in Worcester from becoming a superstore

Edgar was born in Colwall, Herefordshire but spent most of his life in Worcester. He qualified as an engineer, and was employed by the former Hereford and Worcester County Council for many years checking motorway bridges. Subsequently he worked for the countryside department on rights of way. After his retirement he continued to take up many occupations, making good use of his excellent brain. For instance, he invented orienteering games which tested the intellect of children and adults while providing enjoyment.

Town crier
Edgar became involved in numerous cases on our behalf. In 1994 he helped local people save Cripplegate Park in Worcester from becoming a superstore: dressing up as a town crier, with bell and tricorn hat, he delivered a petition to the mayor (pictured below). He represented us at a complex public inquiry into fencing on Wetley Moor common in Staffordshire in 2003 (which he won), and at Hartlebury Common in Worcestershire.

He willingly helped our local correspondents, writing erudite papers with ingenious solutions to problems they might face. His guidance for town and village green claimants, on preparation for and appearance at public inquiries, is invaluable. Nothing was too much trouble for Edgar; he was generous with his time and never demonstrated superiority over others.

Edgar played a vital role in the nationally-significant, 15-year campaign against the deplorable rationalisation scheme involving about 100 paths in Ombersley and surrounding parishes in Worcestershire. He helped to ensure that Omrats (as he dubbed it) foundered. Had it succeeded, it would have been replicated throughout the country, causing mayhem to the path network and huge anxiety and work for user groups.

Sage advice
He was also chairman of the Ramblers’ Hereford and Worcester Area and of the Malvern Hills Footpath Society for many years as well as chairman of the Worcestershire Local Access Forum (LAF) to which he gave a series of lectures.

When he retired in 2013, the LAF presented Edgar with a walking-stick and framed citation. The chairman, Gerry Taggart, paid tribute: ‘Edgar put in a huge amount of work for the LAF. He is an expert in all things connected with rights of way and commons, and his sage, considered and accurate advice to the LAF has been much appreciated over the years.’ We echo that. 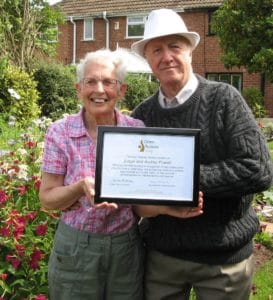 Edgar had unfailing support from his wife Audrey, and when he retired as local correspondent the society presented them both with honorary life membership—which was richly deserved.