On 15 December, for the first time in 45 years, the public can win lost commons in Cumbria and North Yorkshire and gain rights to walk, and possibly ride, on them.  This could lead to a significant new area of land for public enjoyment.

Cumbria and North Yorkshire are to be added to the list of seven pioneer areas* in England where commons can be put back on the register, under part 1 of the Commons Act 2006.

The Commons Registration Act 1965 required all commons to be registered but only allowed three years for this to be done.  In 1970 the registers closed and commons which were left off ceased to be common land in law.  Now in some parts of England anyone can apply for wrongly-excluded land to be restored to the register.

We are encouraging people to claim commons. Says our case officer, Nicola Hodgson: ‘It’s well worth claiming commons because once land is registered we win the right to walk, there (if it has not already been mapped as access land) and there may be new rights to ride too.  Furthermore the land is protected from development and enclosure.’

We believe that there are many commons which need to be registered. Bassenthwaite, Cumbria, where commons can be claimed. Photo: Ian Brodie

In Cumbria there are potential commons at Irthington, Hethersgill, the Solway Coast, Bassenthwaite, Seatoller Fell and Fawcett Forest, to name a few.

Ian Brodie, who advised the society on the bill which became the Commons Act 2006 and is a former Director of Friends of the Lake District (FLD), now acts as a consultant to FLD and the Open Spaces Society.

Together with FLD Ian hopes to make applications and says: ‘This long-awaited opportunity for the people of Cumbria to regain their cultural heritage is one we can ill-afford to miss.  Some landowners were pleased at the under-registration of common land in the county during the original process but this failure to register prevented people from gaining access to some excellent sites.  Now is the welcome chance to correct past errors.’

The application is made to the county or unitary authority and the applicant must submit evidence to show that the land was ‘waste of the manor’, ie open, uncultivated and unoccupied at the date of the application.

Says Nicola Hodgson: ‘In Cornwall, where part 1 of the Commons Act has been in force since 2008, there have been several successful applications. 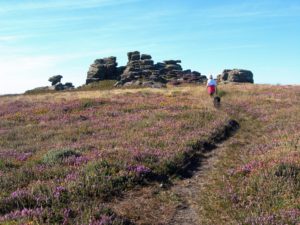 ‘Some of this land had already been mapped as access land but now that it is registered as common it is also protected from development.

‘But it’s not all good news,’ says Nicola.  ‘Part 1 of the Commons Act also allows landowners to apply to remove commons from the register if they can prove an error was made in the past, or that the land is within the curtilage of their properties.  The government has decided to implement this part of the act throughout England, whereas we can only apply to claim land in the seven pioneer areas plus Cumbria and North Yorkshire.

‘We have argued that this is unfair to the public and will continue to press for full implementation throughout England.’

*The seven pioneer areas where part 1 of the Commons Act 2006 was introduced in October 2008 are Blackburn with Darwen, Cornwall, Devon, Hereford, Hertfordshire, Kent and Lancashire.  It has not yet been implemented at all in Wales.