We have welcomed the decision of an inspector to refuse permission for an access road across Dunsfold Common, six miles south-east of Godalming in Surrey.

In her decision letter, inspector Helen O’Connor LLB MA MRTPI, appointed by the Secretary of State for Environment, Food and Rural Affairs, has rejected an application by Kitewood Investment Ltd to facilitate access across the common onto a development site for 21 homes north of Gratton Chase and east of the common. 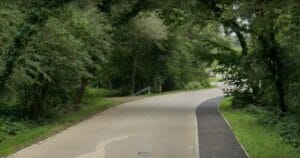 The threatened land is to the left of the road. Photo: Google streetview

Kitewood proposed to upgrade an existing field-access into a residential road, and sought the consent of the Secretary of State under section 38 of the Commons Act 2006.

The inspector found[1] that the proposed access would ‘dilute the woodland character’, expressed concern about developments affecting the common ‘that cumulatively would significantly undermine the biodiversity’, found ‘localised harm to the landscape character of the common’, described the proposal as ‘suburban encroachment’, and considered the ‘cumulative impact’ taken with previous works in the vicinity (including Gratton Chase itself).

Speaking about the decision today, case officer Hugh Craddock said: ‘We warned the developer that it had taken the wrong road, and should have applied for an “exchange”, dedicating part of the development site as new common to replace what was needed.

‘We also proposed an alternative access route which would not affect the common, and the inspector agreed with us that no “robust exploration of potential alternatives has been undertaken.”[2] But the developer did not listen, and chose to respond through its solicitors and press ahead without any concession.’

Hugh added: ‘We are not opposed to appropriate development in Dunsfold. But we hope that developers in Dunsfold now will get the message: don’t regard the common as an easy target and do explore the alternatives. If there is no alternative to taking part of the common for development, add something back to the common in its place.

‘We do not wish unnecessarily to delay development off Gratton Chase, and we are confident that, if the right application is made to the Secretary of State, it soon can be granted with our support.’