We have condemned a proposal for works on Hare Lane Green [1] as hare-brained. 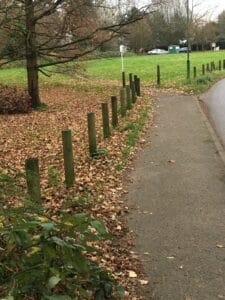 The Luminous Property Group has applied to the Secretary of State for permission (for works on common land) to construct a raised and widened footway on Littleworth Road south of Claygate House. The footway would be bounded on the inside with railings, to protect users from the increased height above the carriageway.

The applicant states that the raised footway is necessary to protect the roots of nearby trees subject to tree preservation orders[2], and that ‘the widening scheme will make the current footpath safer for members of public, children, elderly, disabled and the vulnerable’.

Criticising the application, Hugh Craddock, one of our case officers, said: ‘We welcome the obligation on the developer to widen the footway outside Claygate House, which is inadequate. But alongside the common, the pavement is already around one metre wide, and it shortly leads to a choice of two unsealed paths across the common, neither of which is to be improved.’

Hugh continued: ‘This new causeway will be bounded by railings as if it were outside a school, and shortly terminate in two pleasant country paths. If people with limited mobility are reassured by using the new causeway, they will wonder what to do when they reach its end. It is classic bureaucratic box-ticking.’

Hugh added: ‘The developer wishes to minimise impact on trees in order to get planning permission, Surrey County Council insists on improvement to the pavement without regard to the wider context of the common or the practicality of use of the connecting paths (the latter being no responsibility of the county council), and the tree preservation officer has endorsed a solution which works in terms of the trees. We have some sympathy for the developer — it merely wishes to do what it has been told in order to get the development under way. But none of them has had proper regard for the common, or thought particularly about the part of the pavement which lies on the common itself. We call on the Secretary of State to refuse the application and demand a rethink.’

[1]Hare Lane Green is registered as common land by Surrey County Council, register unit CL264. The green is owned by Elmbridge Borough Council. Luminous Property Group, acting through Russell-Cooke LLP, has applied for consent under section 38 of the Commons Act 2006 in relation to the footway works (so far as they affect the common). The redevelopment of Claygate House, and associated highway works, have planning permission from Elmbridge Borough Council under reference 2020/2095.

[2]The trees subject to tree preservation orders are located on the boundary of the common and the development site. The trees planted on the common just to the east of the posts are understood not to be protected.