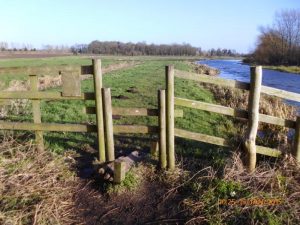 We are pleased that Norfolk County Council has belatedly replaced unlawful stiles with gates on Buxton with Lamas footpath 4, three miles south east of Aylsham. The stiles were in appalling condition and difficult to negotiate, and they had not been authorised on this public path (under section 147 of the Highways Act 1980)(1).

The path, which follows the River Bure navigation to the east of Buxton, is about two and a half miles long.

In 2015, our member Roy Wheeler reported seven unlawful stiles on this route to Norfolk County Council which, as highway authority, has a legal duty to keep public paths open and in good order. Roy was supported by our local correspondent Ian Witham.

Two stiles were replaced by gates within three months. Despite repeated requests, the council took no action on the other five until a month or so ago, when the landowner replaced the stiles with gates. The gates have now been authorised on the route and they are easy to negotiate. One stile was removed totally as it could not be authorised under the Highways Act. 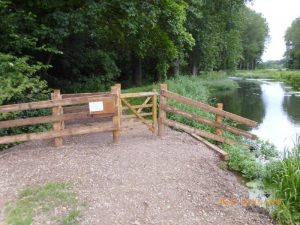 Says Ian Witham: ‘We were dismayed by the length of time it took the council to resolve these unlawful obstructions but are relieved that the work has now been done. The four stiles, which were in various states of disrepair but were all difficult and potentially dangerous, must have deterred people from enjoying this attractive route.

‘We are grateful to Roy for pursuing this matter; it demonstrates that in these days of austerity it is vital that local people keep a close watch on their paths.’

1 The definitive map and statement, held by Norfolk County Council, is the official record of public paths. The statement did not include any stiles, nor had the council authorised them under section 147 of the Highways Act 1980, therefore they were illegal obstructions. The council can authorise structures on a public path, under section 147, provided that the land is in use for agriculture, or is being brought into such use. The structures must be to British Standard 5709.