In February 2022, the society contributed to a project about access and land justice.  This was run by Dr Camilla Penney and Dr Elsa Noterman from Cambridge University, and included a two-day workshop in which the society participated. 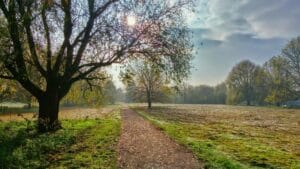 In February 2022, the society contributed to a project about access and land justice, with a workshop at Cambridge University. Photo: The Backs, Toni Lluch

Day one started with a walk to the Cambridge rugby ground with the Cambridge group of the Ramblers.  The purpose was to walk a path for which there is historic evidence.  The Ramblers have researched this, and have applied for the route to be added to the definitive map and statement.

This was followed by a workshop on connecting land access and social justice, where our general secretary Kate Ashbrook was among the speakers.  She talked about the history of the Open Spaces Society and in particular its work on common land.

The second day was a workshop on recording public paths.  Here Helen Clayton, our case officer (rights of way), gave an introduction to public rights of way and why they matter.  Our chairman Phil Wadey, and colleague Sarah Bucks, then explained how one goes about researching the historic evidence for public paths and applying to record them on the definitive map.  They ran a series of sessions which took participants through the various steps of the process.

The day ended with the Ramblers talking about Cambridge’s paths and the wider context of public rights of way.

It was an insightful two days, with broad discussion about public access and our rights to land. You can watch the full recordings from the workshop in February here.