We are pleased that the local government ombudsman has told the City of York Council that it must speed up its work on updating the official (definitive) map of public paths.
This follows a complaint by our member Graham Cheyne about the council’s inaction on his application to add a path at Fulford to the definitive map. Indeed, the council had said that it would be 29 years before it could proceed with his application. If paths are not recorded on the map, they are given no protection and are unlikely to be maintained.
Graham applied in 2012 to add the path to the map. Two years later, the council having done nothing, he applied to the Secretary of State for Environment to direct the council to make the official order. The environment secretary told the council it must decide the application within 12 months. 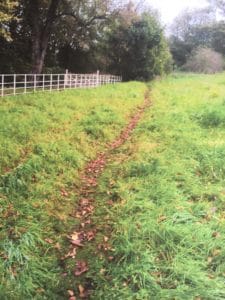 Nearly two years later, in 2016, the council resolved not to make the order. Graham appealed against this and an inspector acting for the environment secretary directed the council to make the order. Nothing happened and when Graham contacted the council it said it would be 29 years before it could make the order because it had such a large backlog.
At this point Graham complained to the ombudsman, who has ruled that the council must, within three months (ie by 9 August) start and finish a review of its service for recording paths on the definitive map with the aim of reducing the backlog, and within a further month report the findings to councillors and seek their approval for any changes required. Within a further two weeks it must inform Graham when it expects to be able to make the order on his application. It must also write to all the other applicants for orders, updating them on changes in the service and giving a time frame for determining their applications.
Says Graham: ‘Were it not for my complaint to the ombudsman it would have been 36 years from the time of my application before York Council even looked at it. It has taken seven years to reach the current position. This is unacceptable when councils have a legal duty to keep their path maps up to date. I am grateful to the Open Spaces Society for its work in pressing local authorities to do their job and the support it offers its members.’
We congratulate Graham for his persistence. Provided York Council does adhere to the ombudsman’s ruling, we should see some improvements in its rights-of-way service which will be of great benefit to the public.